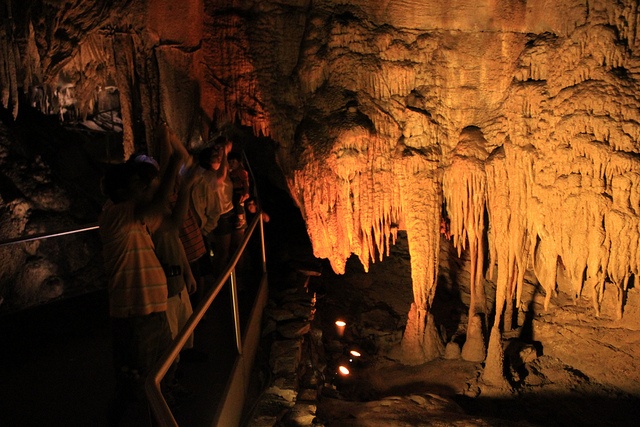 I recently read this article from New Scientist, which described a new technique for mapping caves using gunshots and a pair of microphones. Here’s an excerpt:

a new system that can use sound waves from a gunshot to quickly map unknown caves and tunnels. The portable system, created by David Bowen of Acentech in Cambridge, Massachusetts, consists of two microphones placed at the entrance of a cave or tunnel, which are hooked up to a laptop loaded with software designed to decode acoustic signals.

A gun is fired four or five times, with about 5 seconds between each shot. Fifteen to 20 seconds later the map appears on the laptop’s screen, with simple graphs that display the area of the cave at different distances, and written explanations of the data, such as “30 feet ahead is a large opening”. A portable subwoofer can be used in place of a firearm as the source of the sound waves.

To infer a cave’s geometry, the device listens for subtle changes in the way sound reverberates through the chamber’s differently sized nooks and crannies. “Every time there is a sudden change in cross-sectional area, it changes the way sound is reflected,” Bowen says.

For example, a roomy cave that suddenly narrows into a cramped channel will only permit high frequencies to pass, says Mike Roan of Virginia Polytechnic Institute and State University in Blacksburg. Most of the low frequencies will rebound towards the cave’s entrance and the waiting microphones: the more low frequencies bounce back, the tighter the passageway. The device can also determine whether the sound waves struck a dead end or found an exit at the end of a tunnel.

It occurred to me that this is a wonderful illustration of an engineering concept known as impulse response. Impulse response is something engineers use to quantify systems. For example, you can quantify the resonance (and damping) of a system by looking at it’s impulse response. The response is dictated by the transfer function of the system. Anyone who has ever built a speaker cabinet, for example, is familiar with the concept of a transfer function. In speaker building, a larger enclosure results in a more damped resonance, but extended low-end response. Conversely, a smaller enclosure results in more resonance, but a higher cutoff frequency. Changing the size of the enclosure is one way to alter the transfer function of the speaker-enclosure system.

It’s a pretty neat application of this stuff, but I can’t help wonder what the Laplace transform of gunshot(t) looks like…