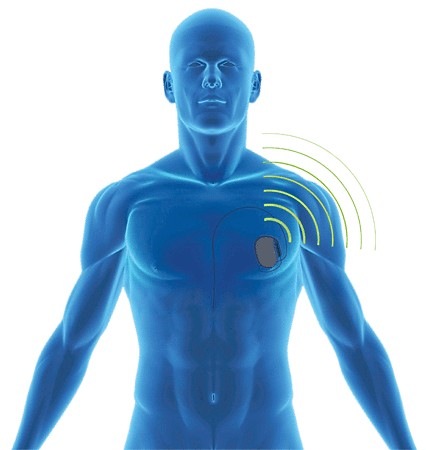 Millions of Americans have implantable medical devices, from pacemakers and defibrillators to brain stimulators and drug pumps; worldwide, 300,000 more people receive them every year. Most such devices have wireless connections, so that doctors can monitor patients’ vital signs or revise treatment programs. But recent research has shown that this leaves the devices vulnerable to attack: In the worst-case scenario, an attacker could kill a victim by instructing an implantable device to deliver lethal doses of medication or electricity.

…The MIT-UMass system uses only two antennas and clever signal processing that obviates the need to separate them. “Think of the jamming signal that we are creating as a secret key,” Katabi explains. “Everyone who doesn’t know the secret key just sees a garbage signal.” Because the shield knows the shape of its own jamming signal, however, it can, in effect, subtract it from the received signal.

Whether medical-device companies will invest in security systems like Katabi and Fu’s — and whether patients will be willing to carry shields around with them — probably depends on how grave they consider the threat of attack to be. Katabi acknowledges that no such attacks have been documented to date. On the other hand, the Federal Communications Commission has recently moved implantable medical devices to a new frequency band that makes wireless communication with them possible across much greater distances.

Comments Off on Jamming transmitter “shield” for medical devices