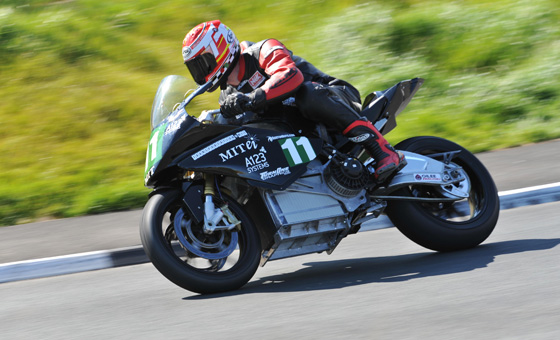 This week, the Isle of Man was buzzing — not just with anticipation for its yearly Isle of Man TT Race, one of the most treacherous in motorcycle racing, but also with the decidedly subtler sound of electric bikes cruising through the racecourse.

A group of MIT students led by PhD student Lennon Rodgers was among 32 teams who entered this year’s all-electric race, bringing their custom-designed eSuperbike to the famous competition on the small island located between Ireland and Great Britain. Several practice and qualifying rounds whittled the field down throughout the two weeks leading up to the race; on Thursday afternoon (June 9) the team’s motorcycle hummed across the finish line, coming in fourth with an average speed of 79 miles per hour.

“It was a great experience,” Rodgers says. “I think the teams with the most reliable motorcycles were able to finish … we focused on reliability, and that’s what saved us in the end.”

The brains of the bike are housed in an Arduino circuit board, which monitors data including the amount of energy used and the temperatures of each motor and battery. A screen on the dashboard continuously displays readings, allowing the rider to adjust the speed to conserve energy if needed. As a backup, the team made the system wireless, streaming data from the bike to their laptops — a modification the team’s rider, veteran Isle of Man racer and resident Allan Brew, appreciated.

“If anything, we had to limit the amount of information we give the rider, because he’s got so much to think about,” Rodgers says. “In fact, he said he didn’t even want a speedometer, he didn’t want to know, he just wanted to go full throttle.”

[from MITnews via the Arduino blog]

Filed under: arduino — by johngineer