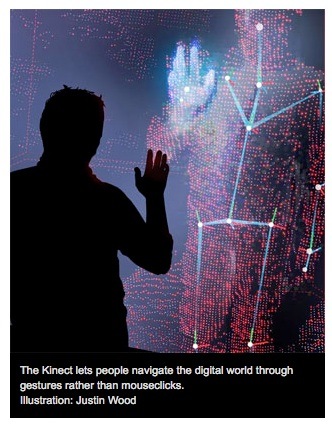 Kinect Hackers Are Changing the Future of Robotics @ WIRED Magazine…

For 25 years, the field of robotics has been bedeviled by a fundamental problem: If a robot is to move through the world, it needs to be able to create a map of its environment and understand its place within it. Roboticists have developed tools to accomplish this task, known as simultaneous localization and mapping, or SLAM. But the sensors required to build that map have traditionally been either expensive and bulky or cheap and inaccurate. Laser arrays cost a few thousand dollars and weigh several pounds, and the images they capture are only two-dimensional. Stereo cameras are less expensive, lighter, and can construct 3-D maps, but they require a massive amount of computing power. Until a reasonably priced, easier method could be designed, autonomous robots were trapped in the lab.

On November 4, a solution was discovered—in a videogame. That’s the day Microsoft released the Kinect for Xbox 360, a $150 add-on that allows players to direct the action in a game simply by moving their bodies. Most of the world focused on the controller-free interface, but roboticists saw something else entirely: an affordable, lightweight camera that could capture 3-D images in real time.

Today Microsoft will release their version of a Kinect SDK too, this is a big day for hackers!