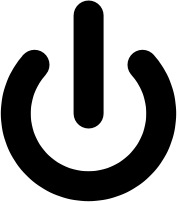 A customer asked “what’s the history of the power symbol I’ve seen everywhere?”

A power symbol is a symbol indicating that a control activates or deactivates a particular device. It incorporates line and circle figures, with the arrangement informed by the function of the control. The universal power symbols are described in the International Electrotechnical Commission 60417 standard, Graphical symbols for use on equipment, appearing in the 1973 edition of the document (as IEC 417) and informally used earlier.

IEC 5009, the standby symbol (line partially within a broken circle), indicates a sleep mode or low power state. The switch does not fully disconnect the device from its power supply. This may appear on a toggle switch opposite a power on symbol, alone on a pushbutton that places the device into a standby state, or alone on a button that switches between on and standby. Alternatively, under IEEE 1621, this symbol simply means “power”.

The standby symbol, frequently seen on personal computers, is a popular icon among technology enthusiasts. It can even be found on T-shirts. It has also been used in corporate logos, such as for Gateway, Inc. (circa 2002), Staples, Inc. easytech, Exelon and others, and even as personal tattoos. In March 2010, the New York City health department announced they would be using it on condom wrappers.