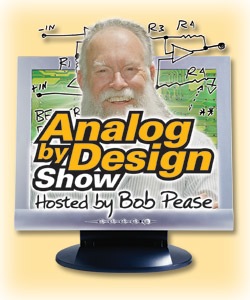 Bob Pease (Robert A. Pease) was an analog integrated circuit design expert and technical author. He has designed several very successful integrated circuits, many of them in continuous production for multiple decades. These include the LM331 voltage to frequency converter,and the LM337 adjustable voltage regulator.

Pease obtained a Bachelors of Science in Electrical Engineering (BSEE) degree from MIT in 1961. He started work in the early 1960s at George A. Philbrick Researches (GAP-R). GAP-R pioneered the first reasonable-cost, mass-produced op amp: the K2-W. At GAP-R, Pease developed many high-performance op amps, built with discrete solid-state components.

In 1976 Pease moved to National Semiconductor as a designer and applications engineer, advancing to staff scientist until his departure in 2009. During his tenure there, he began writing a continuing popular monthly column entitled “Pease Porridge” in Electronic Design Magazine about his experiences in the world of electronic design and application.
He was the author of eight books, including Troubleshooting Analog Circuits, and holds 21 patents.

His other interests included hiking and biking in remote places, and working on his old Volkswagen Beetle, to which he often referred in his columns.

Bob was killed in a car crash, while not wearing a seat belt, on 19 June 2011 after attending the memorial service of Jim Williams (analog designer), another renowned staff scientist working at Linear Technology.

His show Analog by Design inspired us to create “Ask an Engineer”.