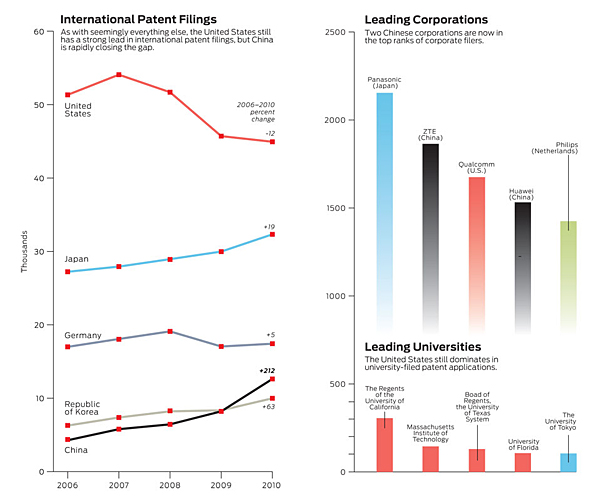 In 2010, China filed 56 percent more international patent applications than the year before. The number of U.S. applications, by contrast, was down for a third year in a row.

The figures come from the World Intellectual Property Organization, a United Nations agency based in Geneva. An international application is the first step toward claiming ownership in 142 nations—a domestic patent protects an invention only in one country.

Despite China’s growth, the United States still tops the list by a wide margin, accounting for more than a quarter of all applications last year. China’s rise, though, is signaled by having two manufacturers in the top ranks of individual corporations: ZTE Corp. and Huawei Technologies Co. That both are in digital communications is no coincidence—that area leads the list of industrial sectors and features another patent powerhouse, Qualcomm.

The United States also still dominates the list of leading university applicants. The University of California system and MIT are at the top, but the roster also includes the University of Florida, in Gainesville, which received US $678 million in research awards in 2010 and is building a new “super incubator.” Staff there will work to commercialize medical and clean energy technologies. The Sunshine State’s innovations may soon go beyond Gatorade.