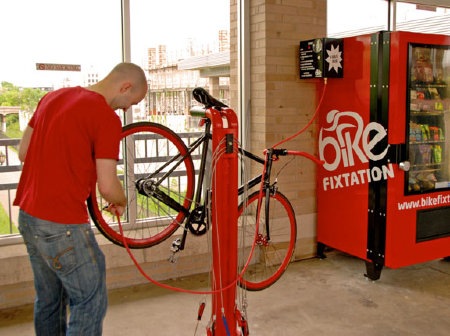 Minneapolis was named the country’s number one city for biking last year by Bicycling magazine, but the city’s bike community isn’t resting on its laurels. Looking to make Minneapolis even more welcoming to cyclists, local entrepreneurs recently opened the city’s first self-service bicycle repair kiosk, to serve the flat tubes and busted gears of the thousands of cyclists who travel Minneapolis’s bike paths each week.

The kiosk, called Bike Fixtation, offers basic bike tools, a repair stand, and a vending machine full of useful goodies, including tubes, lights, patch kits, and snacks. For their first station, founders Alex Anderson and Chad Debaker chose a location along the city’s bicycle superhighway, the Midtown Greenway. The crowning achievement of the city’s pro-biking initiative, the Greenway is a cyclist’s dream with 5.5 miles of bike-only trails reclaimed from an outmoded railroad corridor. The repair center will be open 18 hours a day, 365 days a year, and a second location is already in the works.

Comments Off on Bike-Part Vending Machine