Apple don’t bring the hammer down on @kcimc too hard 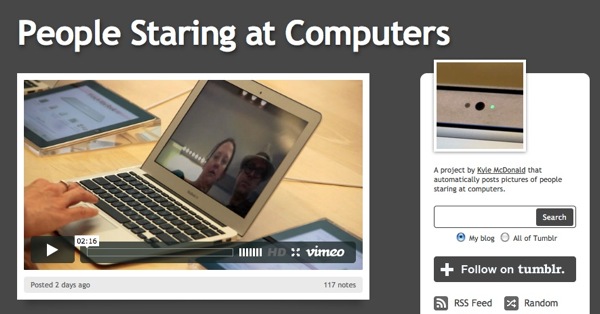 Hey Apple, we heard you sent the secret service after an artist in NYC…

Artist Kyle McDonald installed a program on computers in two New York Apple Store locations that automatically takes a photo every minute. Now his personal computers have been confiscated by the U.S. Secret Service. McDonald’s project was to capture people’s expressions as they stare at computers, a subject he had first explored in a recording he made of his own computer time over two days using the same program.

Look, we don’t know enough about the legality of what Kyle may or may have not done, but it seems mostly harmless. Apple, just remember one thing – Apple was founded by a hacker and an artist imagine if the Secret service took away everything you had when you started out… Do what you gotta’ do, but don’t completely destroy the kid?

Apple was started by two hacky dudes – Steve Wozniak, Steve Jobs, and the long road to the iPad. – By Tim Wu @ Slate Magazine…

The two young men, electronics buffs, were fiddling with a crude device they’d been working on for more than a year. That day was their eureka moment: Apple’s founders had managed to hack AT&T’s long-distance network. Their invention was a “blue box” that made long-distance phone calls for free. The two men, in other words, got started by defrauding the firm that is now perhaps Apple’s most important business partner.

The anti-establishment spirit that underpinned the blue box still gives substance to the iconoclastic, outsider image Apple and Steve Jobs have long cultivated. Back in the 1970s, the inventors reinforced their company’s ethos with their self-styling as counterculturals. Both men had long hair and opposed the Vietnam War. Wozniak, an inveterate prankster, ran an illegal “dial-a-joke” operation; Jobs would travel to India in search of a guru.

But the granular truth of Apple’s origins was a bit more complicated than the simplifying imagery suggested. Even in these beginnings, there was a significant divide between the two men. There was no real parity in technical prowess: It was Wozniak, not Jobs, who had built the blue box. And it was Wozniak who conceived of and built the Apple and the Apple II—the personal computer that would be unquestionably the most important Apple product ever and arguably among the most important inventions of the latter 20th century. Jobs was the businessman and the dealmaker, essential as such, but hardly the founding genius of Apple computers, the man whose ideas became silicon and changed the world. That was Wozniak.

“When I was in high school Steve Wozniak and I, mostly Steve, made this little device called a “TV JAMMER” it was this little oscillator that put out frequencies that would screw up the TV. Woz would have it in his pocket and we’d go in to like the dorm at Berkeley where he was going to school and a bunch of folks would be watching like Star Trek and he’d screw up the TV, somebody would go up to fix it and just as they had their foot off the ground he’d turn it back on! If they put their foot back down on the ground he’d screw up the TV again, within 5 minutes have someone like this [Steve Jobs posing all pretzel looking] for the rest of the Star Trek episode.” – Steve Jobs