Our experiment and review of google+ “hangout” video feature, we like it… 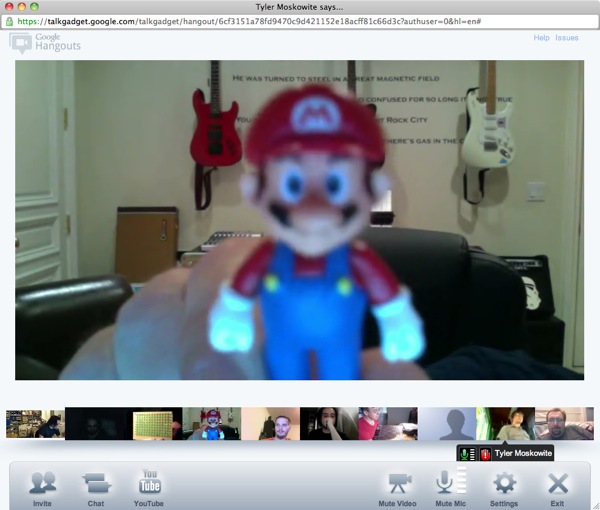 Before our weekly “ASK AN ENGINEER” chat we started a “google+ hangout” 30 minutes before the show to check it out. A google+ hangout allows 10 people to video chat all at once, they can be people from your “circles” or anyone from the public who also a google+ account. It appears you can do text chat as well show a YouTube video but only did the video chat.

The hangout “creator” posts a hangout and chooses which circles to add, we choose public. Anyone in our “stream” could then join (up to 10 people) – we tried to cut/paste a link in the IRC chat for the show but that did not seem to work out that well.

The chat feature is pretty neat, 10 people can all see and talk to each other. As one person talks their video is shown the largest and the title bar shows their name. To put this in Apple terms it “just works”. It’s impressive, all through a browser and we used an external camera on a Mac.

The “hangout” seems perfect for product development teams, designers and engineers with agenda driven meetings. This tool is likely used at google for everything now. Specs from google here.

The challenge for the public (for now) seems to be the unknown social protocols when 10 people all have video chat at the same time. In our chat it was unclear who should talk first, how to end and basically hand it off to someone else and there was some “dead air” while we all just stared at each other. That’s the interesting part we think, this is new and people will likely figure out how to take turns on the fly, etc. In person a seating arrangement or the loudest voice would happen, but with google hangout we’ll all need to think about 10 person video chat protocol with and without an agenda or pre-assigned roles.

Any way, we like this better than Facebook and will likely do a mini-10-person video chat 30 minutes before the show each. We also know how we’ll solve any “what to talk about” challenges.

We think we’ll have a topic “show-and-tell” so 10 makers can show their project(s) to each other, meet each other and then we’ll do the show. It’s only 10 people per hangout now but that’s ok, all the folks in the IRC chat can pair (dec-off? 10) and meet each.

Later, we might have 9 guests for a “summit” and record it or stream that live, who knows – we have a few other ideas too. Our goal with this, we think, will be connecting people who do electronics.

Note: We asked everyone if it was ok if we took a screenshot (above) of the hangout list and the video, they said ok 🙂