The Kinect has been a big success for Microsoft’s Xbox. It’s a motion sensor that lets you play video games by moving your body — no controller of any kind necessary. Computer engineers and hobbyists have hacked it to do all sorts of amazing things: They’re using the motion sensor to browse the Web without touching anything, navigate Google Earth with slight bodily movements, and even aid with physical rehabilitation. Perhaps soon, these innovations will let you wave a finger and bring up the Internet on your kitchen wall. Microsoft has just released a software development kit to make it easier for programmers to use the Kinect to control Windows computers, not just the Xbox. Many technologies surrounding bodily motion capture existed well before the Kinect. What is it about this game that has led to such a flowering of worldwide creativity?

Yes, it does seem the Microsoft PR machine & (new) Kinect studio team is taking credit for the open source “Kinect hacking” community and says they purposely “allowed” hacking – the report ignores the efforts from all the open source Kinect hackers out there and how this all happened. They also left out the threatening and intimidating when we first started the Kinect bounty. Kinecthacks.net is not part of Microsoft in any way… WIRED has a full write up on the real story.

SCHMIDT: Giving developers the wrenches to the Kinect was a calculated decision by Microsoft. They could have encrypted the system, but decided not to.

SCHMIDT: Microsoft’s approach to the Kinect is part of a generational shift in the tech industry. Letting other people in to tinker with inner workings could become the default for big companies, rather than building old-fashioned walls for control.

Here is a previous post the last time Kinect was on NPR where the Microsoft team is cornered on air by Ira about the open source efforts (at the time there was a lot of lawsuit-talk). 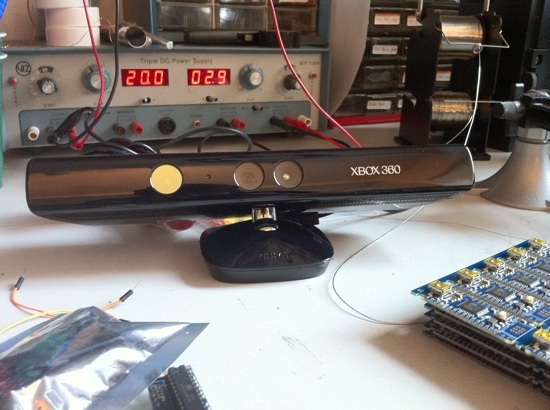 Microsoft says we’re not going to get in trouble – thanks Ira and NPR!

FLATOW: So you have no problem… with the people using the open-source drivers then?

Ms. LOFTIS (Microsoft): As an experienced creator, I’m very excited to see that people are so inspired that it was less than a week after the Kinect came out before they had started creating and thinking about what they could do.

FLATOW: So no one is going to get in trouble?

FLATOW: You heard it right from the mouth of Microsoft.

You can listen to the full show here and also read the transcript.