The eBay of Electricity 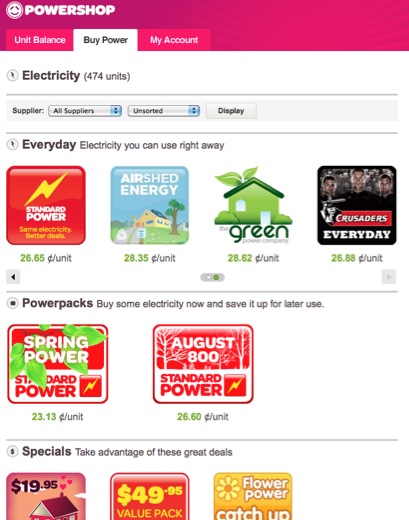 The eBay of Electricity @ Forbes.

Bruce Hoult is a software engineer in Wellington, New Zealand.   Mr. Hoult signed up for Powershop last April 2009 – mainly to save money, but as soon as he discovered that Powershop offered an open API (Application Programming Interface) he started tinkering with it.   Since nighttime power is 25% cheaper than daytime power he set out to shift some of his power usage from the day to evening. He works from his home office and he did what a good enterprising tinkerer does: he ran experiments with his own power usage putting together available technologies in new ways.

“I built a computerized device based on Arduino [a website that offers an open source hardware and software platform for rapid prototyping] that I programmed to turn my  heater and dehumidifier on and off at different times of the day”,  said Mr. Hoult.  “After tracking power, temperature, and cost for a while, I determined that it was optimal to crank up the heater an hour or two before 7am when power cost goes up.  It turns out that the walls and the house itself retain a lot of the heat and slowly release it during the day.  The result is that I use much less power during the day while maintaining the same temperatures as before.”  Over the last twelve months Mr Hoult has saved NZ$500 or nearly 24% compared to the previous year.

I asked him if he was thinking about commercializing this device. “The payback is less than a year so there could be a market for it. However, I’m a technical guy.  Marketing is definitely not my thing.”

Filed under: arduino, tweet-a-watt — by adafruit