Ciudad Nazca: Draw a City in the Desert 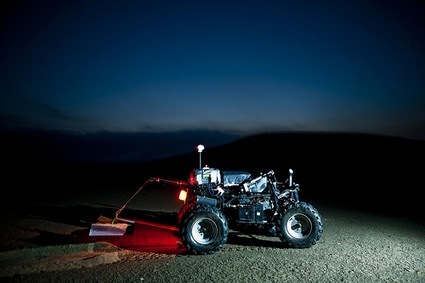 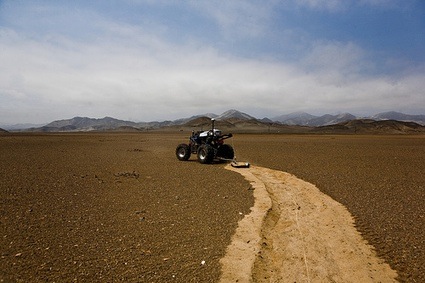 This incredible project by Peruvian artist Rodrigo Derteano draws a scale map of an imaginary city in the desert sand. It utilizes an autonomous four-wheeler with a plow to “etch” the ground. Recently, Derteano was interviewed by Regine Debatty over at wemakemoneynotart:

Hello Rodrigo! What is the motivation behind the project? During her presentation at FILE, Vicky mentioned the spectacular growth of the city of Lima and the need to find new ways of designing and envisioning cities, maybe by building them in the desert. Can you expand on this?

I live and grew up in Lima. About 60% of the city today lies within the desert, most of it grew without any serious urban planning. It’s a self-made metropolis, the second largest city built in the desert after Cairo. It grew from 1 million to 8 million people in less than 60 years. There’s a lot of problems derived from this development in terms of sustainability and living standards which exacerbate the huge inequality of our society. The desert plays a big role in this regard. People living in desert areas of the city are usually poor and often have to pay more for water than those living in more centric (richer) areas. They also lack proper infrastructure and have much less public places and parks. For a long time, these areas were not considered part of the city by the ruling class and the authorities until they became the majority.

By drawing a gigantic map of a city onto the desert, the project not only seeks to draw attention to this facts, but questions our very concept of city, specially in regards to its environment. Lima is a sort of negation of the desert. Our model and ideal of city is very occidental, and does not adapt very well to its context. The desert is seen a kind of non-place, not a part of our living environment. In this sense, there’s a sort of irony in using a robot to draw a city onto the desert, as if it would be drawing it on the surface of Mars (exploring the outer space for the possibility of urban life).

I’m also fascinated by the Nasca people and their lines (200 BC – 600 AD). Studying theories about them, I found their notion of desert as ritual space, and therefore an expansion of their living space, to be in sharp contrast to our notion today. Some see the Nasca lines as cult to fertility and life in the desert, trying to communicate beyond. In this sense, Nasca City is kind of a cult to urban life in the desert today, not communicating beyond, but within our society…

Filed under: art, robotics — by johngineer

Comments Off on Ciudad Nazca: Draw a City in the Desert