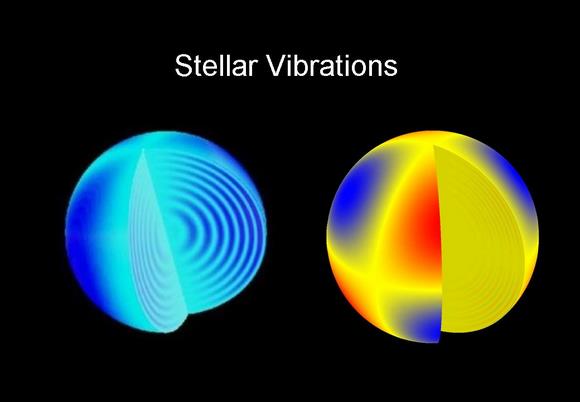 I came across this article a couple days ago. Yesterday’s earthquake got me thinking about it again. It discusses the relatively new science of astroseismology, and how it can be used to find the age and rotation of stars, and possibly even find orbiting planets. From Universe Today:

Asteroseismology is a relatively new field in astronomy. This branch uses sound waves in stars to explore their nature in the same way seismologists on Earth have used waves induced by tectonic activity to probe the interior of our planet. These waves aren’t heard directly, but as they strike the surface they can cause it to undulate, shifting the spectral lines this way and that, or compress the outer layers causing them to brighten and fade which can be detected with photometry. By studying these variations, astronomers have begun peering into stars. This much is generally known, but some of the specific tricks aren’t often brought up when discussing the topic. So here’s five things you can do with asteroseismology you may not have known about!

Determine the Age of a Star

From high school science you should know sound will travel through a medium at a characteristic speed for a given temperature and pressure. This information tells you something about the chemical composition of the star. This is a fantastic thing since astronomers can then check that against predictions made by stellar models. But astronomers can also take that one step further. Since the core of a star slowly converts hydrogen to helium over its lifetime, that composition will change. How much it has changed from its original composition towards the point where there’s no longer enough hydrogen to support fusion, tells you how far through the main sequence lifetime a star is. Since we know the age of the solar system very well from meteorites, astronomers have calibrated this technique and begun using it on other stars like α Centauri. Spectroscopically, this star is expected to be nearly identical to the Sun; it has very similar spectral type and chemical composition. Yet a 2005 study using this technique pinned α Cen as 6.7 ± 0.5 billion years which is about one and a half billion years older than the Sun. Obviously, this still has a rather large uncertainty to it (nearly 10%), but the technique is still new and will certainly be refined in the future.
And if that wasn’t cool enough by itself, astronomers are now beginning to use this technique on stars with known planets to get a better understanding of the planets! This can be important in many cases since planets will initially glow more brightly in younger systems since they still retain heat from their formation and this amount of extra light could confuse astronomers on just how might light is being reflected leading to inaccurate estimates of other properties like size or reflectivity.

We already know that stars rotation is a bit funny. They rotate faster at their equator than at their poles, a phenomenon known as differential rotation. But stars are also expected to have differences in rotation as you get deeper. For stars like the Sun, this effect is related to a difference in energy transport mechanisms: radiative, where energy is conducted by a flow of photons in the deep interior, to convective, where energy is carried by bulk flow of matter, creating the boiling motion we see on the surface. At this boundary, the physical parameters of the system change and the material will flow differentially. This boundary is known as the tachocline. Within the Sun, we’ve known it’s there, but using asteroseismology (which, when used on the Sun is known as helioseismology), astronomers actually pinned it down. It’s 72% the way out from the core.

You can check out the whole article here. Interesting stuff!

Comments Off on Using Astroseismology to Characterize Stars