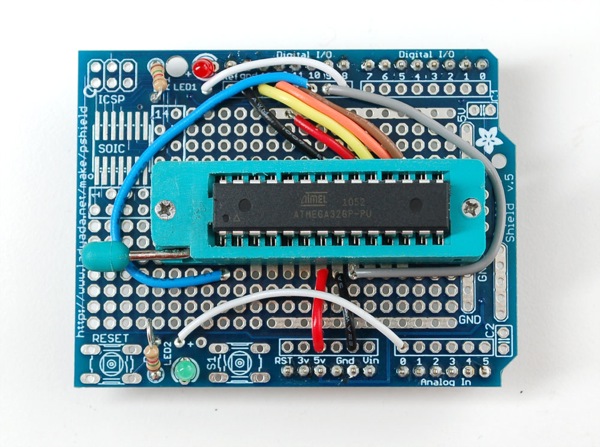 TUTORIAL: Arduino Hacks -Burning bootloader chips using an Arduino. A lot of people start learning about microcontrollers with an Arduino but then want to build their own projects without having to sacrifice their dev board. Or maybe they want to make their own Arduino variant, that is compatible with the IDE. Either way, a common problem is how to burn the bootloader onto the fresh AVR chip. Since AVRs come blank, they need to be set up to be Arduino IDE compatible but to do that you need an AVR programmer (like the USBtinyISP).

The good news is that you can burn bootloader using your existing Arduino with only a little bit of work. There’s even a minitutorial on the arduino.cc site
This tutorial is an extention of that tutorial. First we’ll show how you can make a permanent bootloader-burner by soldering a 28-pin ZIF socket to a proto shield and use the PWM output line of the Arduino to generate a clock. This will let you ‘rescue’ many chips that have been set to the wrong type of oscillator, or change ones that are set from external oscillator (most Arduino bootloaders) to internal (such as the lilypad).