How To Propose To Your Girlfriend with a PCB 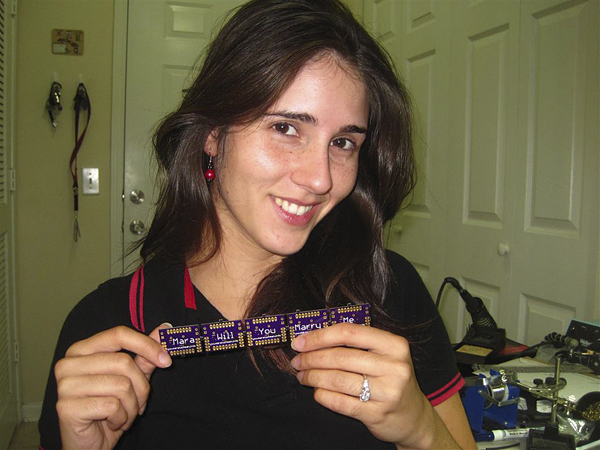 This is the story about an electronics geek and how he proposed to the girl of his dreams; who also happens to be a geek. I try to keep my blog about projects and not about my personal life, but in this case I’ll make an exception. This is pretty big after-all.

I met the love of my life, Mara Tuchman at college. We were both Electrical Engineering students with many classes together. We were friends for many years before becoming more and I wouldn’t have had it any other way. But I’ll skip the sappy story of how we started dating for some other time. This is how I asked her to marry me.

She recently started a project that required her to design a circuit board and have it fabricated. I’m not going to go into the details of what the project is, she will post about it when it’s finished. This is her first time getting a circuit board professionally fabricated, so I helped her prepare the design to be sent off to Laen’s DorkbotPDX service. That’s when I had the eureka moment. I don’t know of anyone else who had proposed on a circuit board in the past! She would never see it coming. As soon as the email to Laen was sent with the design files I quickly sent him another email asking for a favor; could he add a message to the boards for me? He agreed.

So began 3 weeks of torture (we missed that weeks panel). I had already set the plan in motion, there was no turning back. I had no exit strategy if I got cold feet. Would the boards arrive early? Would she open them while I wasn’t there?

Finally after an eternity I hear the iron getting shut off and her starting to open the envelope. My heart starts pumping as I reach for the ring in my pocket. A few seconds of silence is broken by her. “Are you kidding me?” That’s my cue.

What follows is the usual happy ending movie proposal; tears, kisses, everything you would expect. I don’t need to go into details. The bottom line is it worked; she said YES! She was so caught off guard by how I did it she couldn’t stop laughing for a long time after.