How The Transistor Got Its Name 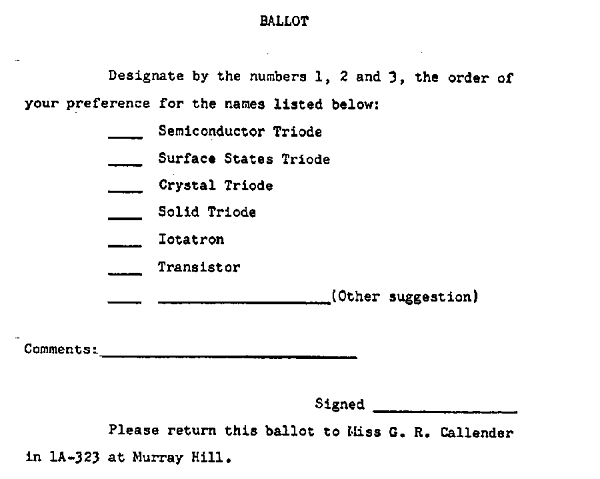 It’s Labor Day here in the US — a good time to look over the work of folks who have gone before us, and maybe learn something new about our past. So I thought it would be neat to share this Bell Laboratories memo from the spring of 1948. The memo, distributed to the senior technical staff, contained a ballot asking them to choose a name for a new device invented the previous winter – the semiconductor triode. Several options were presented, including my personal favorite, the Iotatron.

In the end, the name “transistor” (“transconductance” + “varistor”) won out over all the others, but it’s still interesting to read the discussion of the other names. I love the note for “solid triode”:

This has the advantage of brevity, and is descriptive in the sense that the device may be explained by the physics of the solid state, and also that the active element is a solid rather than vacuum or gas filled. However, the word “solid” also commonly means sturdy, massive, rugged, or strong, which terms are contradictory to the actual physical characteristics of the unit.

If you’ve ever seen a photo of the first transistor, you’ll agree the secondary meaning of the word “solid” does not apply.

You can read the entire memo here. For simplicity’s sake I uploaded it to my flickr account, but I claim no ownership of the image. I got the original via the Internet Archive’s Wayback Machine.

So what do you think? What would you have called it? Post your suggestions in the comments!