Interactive visuals workshop with Milkymist One and Arduino 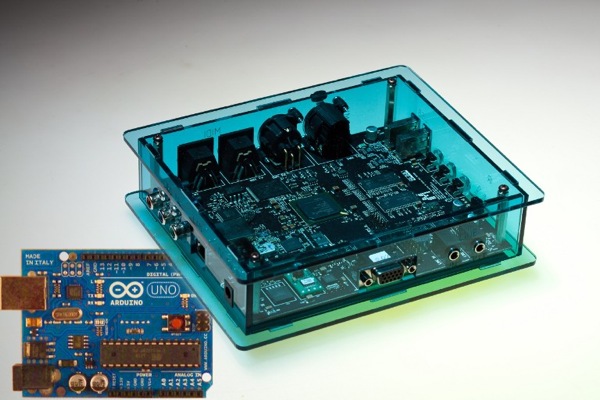 Interactive visuals workshop with Milkymist One and Arduino.

The Milkymist One is an open hardware live video synthesizer. Connect a camera and a videoprojector, press the power button, and seconds later, everything you film becomes live psychedelic effects of color and light. Point the camera at a dancer on stage, at people attending your party, at toys, use UV-glow paint… there are no limits to creativity! If no camera setup is available, the Milkymist One can produce purely generative effects which react to the ambient sound, making it an ideal option for music bands, clubs and party organizers who want a turnkey solution for simple visual effects. VJ’s will appreciate the possibility to design new visual effects using the Flickernoise Patching (FNP) language, which allows you to create unique and personal shows without requiring extensive experience with computer programming. And if you do program computers, you will certainly like the fact that the complete Milkymist One design is open source.

Sébastien Bourdeauducq is an inventor passionate about science, electronics and open source. After working for several small companies – which included developing the Wi-Fi driver infrastructure for the Nabaztag/tag – he founded Milkymist in the summer of 2007. The project combined his interest for the world of music with the desire to learn about and open up system-on-chip design, and it has now grown into a full-fledged open source project and commercial venture. Since 2011, he is also providing electronics engineering services for the CERN’s open hardware repository. Sébastien holds an engineering degree from Supélec and a MSc in SoC design from KTH. His hobbies include traveling, urbex and hackerspaces.

Fabienne “fbz” Serriere is a hardware person who likes spreading open hardware through hands-on workshops. She has worked on realtime low latency controllers for artists and musicians, massively multichannel audio, hardware reverse engineering, and open source hardware. In the past she has worked on writing hardware how-to’s for popular online publications. She organizes a yearly hands-on event for hardware called hardhack (http://hardhack.org). She documents her work on her personal blog (http://fabienne.us).