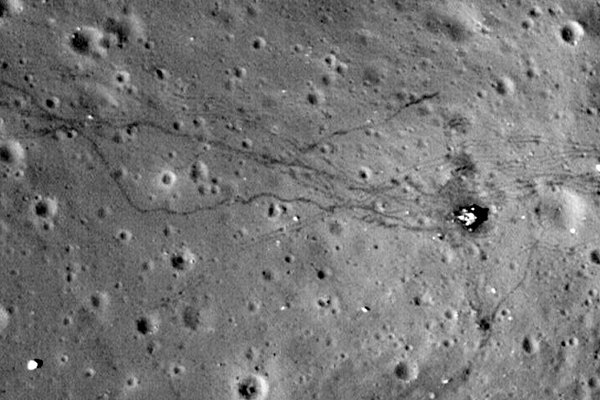 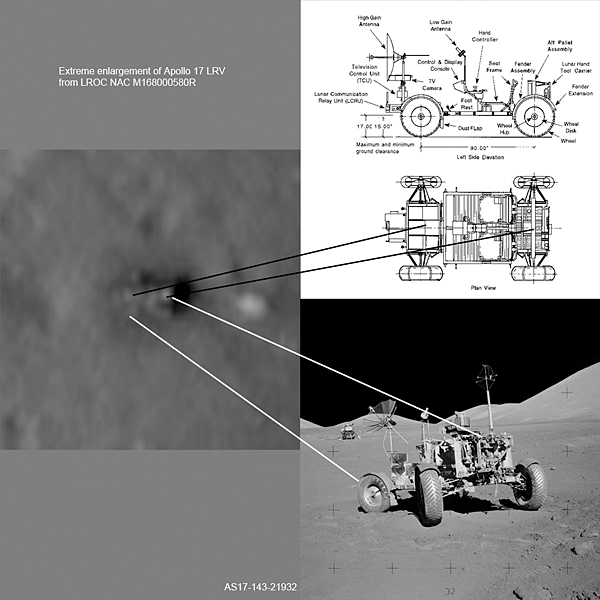 NASA’s Lunar Reconnaissance Orbiter snapped a few hi-res shots of the surface of the moon, including the one above (top) showing the Apollo 17 site and lunar rover tire tracks. From the AP:

Images taken by NASA’s Lunar Reconnaissance Orbiter from 13 to 15 miles up show the astronauts’ paths when they walked on the moon, as well as ruts left by a moon buggy. Experts could even identify the backpacks astronauts pitched out of their lunar landers before they returned to Earth.

The pictures were taken two weeks ago and show the landing sites for Apollo 12, 14 and 17. The closest images are of the 1972 Apollo 17 site, the last moon mission.

Apollo 17 Commander Eugene Cernan wrote in an email to The Associated Press that the photo gives him a chance to revisit those days, “this time with a little nostalgia and disappointment. Nostalgia because those special days are fondly etched in my memory and disappointment because it looks like now we will not be going back within the days I have left on this planet.”

Two years ago, images from the same spacecraft from 30 and 60 miles out showed fuzzier images. But this year the orbiter dipped down to take about 300,000 more close-ups. The trails left by the astronauts are clear, but the places where backpacks were discarded, Apollo 17’s moon buggy, and the bottom parts of the three lunar landers are blurry.

“You have to really look at it for a long time to figure out what you’re looking at,” Robinson said. For example, when it comes to the moon buggy he said, “if you squint really hard you can resolve the wheels and that the wheels are slightly turned to the left.”