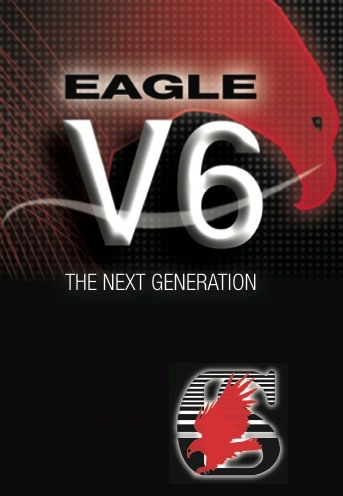 XML database structure redesign
• Read, edit and parse the data outside of the EAGLE tool The new XML database structure provides the ability to write scripts that manipulate designs in the EAGLE format which will give users huge productivity benefits. You can make design changes, import information from other designs, and even translate from other formats. This is the first CAD database format to use ASCII text as a format and could become a standard in the industry for communicating designs – making EAGLE the most flexible, user friendly and productive PCB tool on the market.

it looks like they’re still shooting for late 2011/early 2012 for the release, but that is just a guess.

the co-founder and lead dev, klaus schmidinger, provided some
additional technical details beyond what is in the marketing flyer:

– Multiple pads can be connected to a single pin, with the choice of
having them all to be connected externally, or assuming them to be
“strongly” connected internally, so that it’s sufficient to actually
route the signal to just a few of the pads (i.e. “bridging”).

– Wires and polygons can be drawn in a package to form arbitrary pad
shapes.

– “Cutout” polygons can be used on any signal layers to define areas
where signal polygons shall not go.

– “Supply layers” have been dropped and will be automatically replaced
with polygons.

– The AUTO command no longer clears the UNDO buffer (unless an existing
job is continued/finished).

– The BOARD command no longer clears the UNDO buffer of the schematic if
a board is newly generated.

– Pasting is now done via the system’s clipboard. This allows groups to
be copied from one instance of EAGLE into an other.

– The PASTE command can now paste a complete consistent board/schematic
pair into the currently edited project. See “Help/Editor
Commands/PASTE/Pasting from a file”.

– Removing a schematic sheet no longer clears the UNDO buffer.

– The UNDO command (as well as the REDO command) now displays in the
status bar what kind of command was undone (or redone) and how long ago
that command has been executed. If the command was originally executed
in the board, and UNDO was done in the schematic, it will also indicate
that (and vice versa).

– The new option LIST in the UNDO command opens a dialog that contains
the entire contents of the undo buffer. You can navigate through the
list of undo/redo steps by click&dragging the list delimiter, or by
directly clicking on any given step you wish to go back or forward to.
If there are several steps between the current delimiter position and
the clicked list item, all steps in between will be executed in the
proper sequence. Going upward in the list means doing UNDO, going
downward results in REDO. CAUTION: this is a very powerful tool! By
going all the way back in the UNDO list (which can be done with a single
mouse click) and executing any new command, the undo buffer will be
truncated at that point, and there is no way back! So use this with
care!

– The number of technologies per device is no longer limited to 254.

– The number of package variants per device set is no longer limited to
254.

– The valid range of values for pin and gate swap levels is no longer
limited to 255.

– The status bar of the editor window now contains indicators that show
whether the drawing has been modified, and whether
forward&backannotation is active.

– The sheet thumbnails in the schematic editor now display the headline
of the sheets’ descriptions as their caption.

– The sheet combo box in the schematic editor now displays the headline
of the sheets’ descriptions.

– The context menu of the sheet thumbnails in the schematic editor has
the new option “Description” which can be used to edit the description
of a sheet.