The Story of the LM13600/LM13700 Transconductance Amplifiers 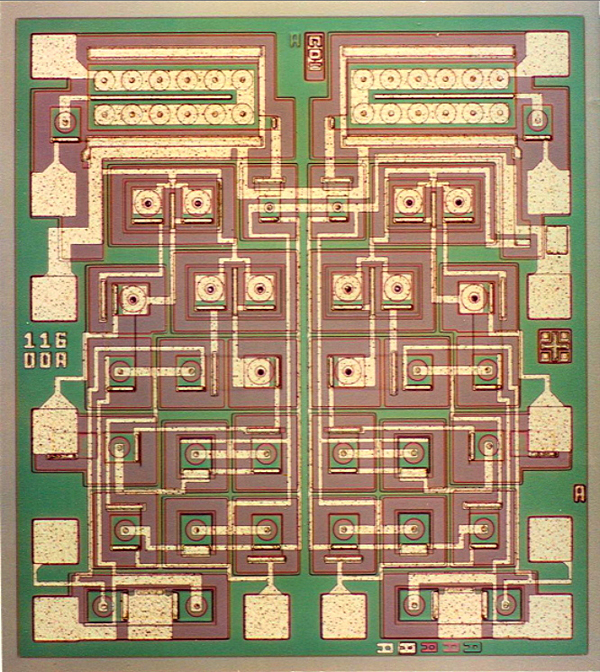 A neat write-up about this fun little chip, written by co-designer Don Sauer:

The LM13600 was designed by Bill Gross and myself in less than 5 minutes.
At the time the Consumer Linear IC design group was training a new mask designer.
We needed something with a few transistors for her to learn how to arrange them in a
optimum circuit arrangement while using minimum silicon area.

At the time, electronic Organs were being done using analog circuitry. I had just
made a trip to one such company and of course they gave me a wish list of what
kind of circuits they would like to see. The RCA 3080 has just come out and it almost
gave the Analog Organ folks everything they wanted. They needed something for analog
variable gain. The application was to shape the attack and decay of various waveforms.

But the 3080 was a true Operational Transconductance Amplifier in that it had a
voltage input and a current source output. For most applications, an external buffer
was needed.

At the time we were considering second sourcing the 3080 anyway.
Also at this very same time, the 16pin plastic dip package had just been developed.
So the development spec for the LM13600 was that it needed a schematic to train someone
in IC layout. It needed to have 16 pins. And we were going to layout the 3080 anyway.
The schematic part was easy. Just used the 3080 exactly. There were 16 pins, so we could
just mirror the layout to do a stereo. That left 3 extra pins per channel. The simplest
buffer was a darlington which needed two pins per channel. There were complaints about
high levels in input signal generated too much distortion in the 3080. That could be
addressed by connecting the left over pin to predistortion diodes.

The aren’t too many discrete OTAs left on the market, since most of the things which you’d use them for are now done with DSPs. The LM13600 & 700 are among the few designs which are still commonly available, and it’s interesting to read the history.

Comments Off on The Story of the LM13600/LM13700 Transconductance Amplifiers