Using Kickstarter to Bring Designs to the Marketplace 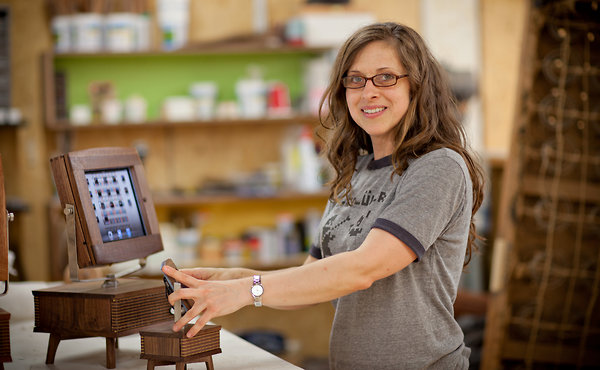 PAULA PATTERSON was back in her studio the other night, where she has spent nearly every weeknight and too many weekends to admit since January. From her day job as a graphic designer at an executive search firm in Midtown, she takes the subway and the fickle B61 bus to Brooklyn (“I don’t know why they print a schedule,” she said). That leaves her about two hours to build another V-Luxe, the iPad stand she designed as a birthday gift for her boyfriend last summer and soon after decided to market online.

“If there’s one thing I failed to estimate, it was the time this project would take,” said Ms. Patterson, 41, looking exhausted but also relieved, because the last of the V-Luxes were boxed up on her work table, ready to ship.

The recipients were backers Ms. Patterson found last fall, through the Web site Kickstarter. For pledging at least $500 toward her $5,000 financing goal, they are entitled to a finished V-Luxe, which stands about 18 inches high, is made of three species of wood and looks a little like a classic Philco Predicta TV from the 1950s.

In turning to Kickstarter to finance the V-Luxe, Ms. Patterson is among a growing number of designers who are using the site to get their sketch pad ideas into production, through crowd-sourced financing. Scan Kickstarter’s design category, and there are dozens of projects in search of backing, from screen-printed glassware billed as “awesome glasses for awesome people” to a sustainable house intended for use in developing countries.

Comments Off on Using Kickstarter to Bring Designs to the Marketplace