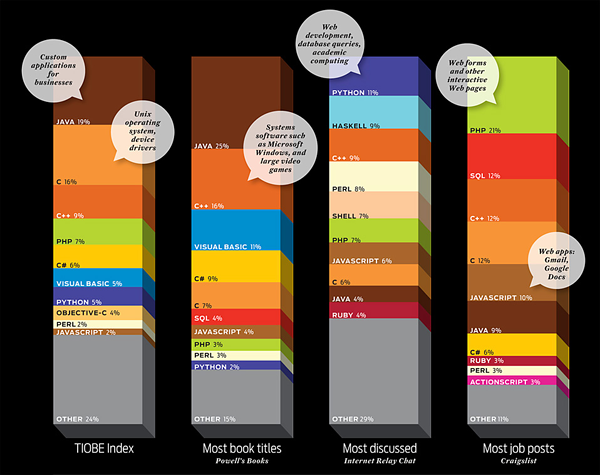 Ritchie S. King from IEEE Spectrum looks at the most popular programming languages:

Listing programming languages is easy—Wikipedia’s page has more than 600 entries—but ranking them by popularity is hard. As David Welton, curator of the site LangPop.com, points out, you can’t send out a horde of researchers to look over programmers’ shoulders and note what languages they’re coding in. So you have to get at it indirectly.

To do that, you can search the Web and find numbers to use as a proxy. And you can tailor the search to target different kinds of popularity: Which languages are the most sought after in the job market? Check a job site. Which are used by elite programmers? Look in on their chat sessions. How established is a language? Visit an online bookstore—new and esoteric languages don’t have many reference books dedicated to them.

The data here come in part from TIOBE, a software research firm based in Eindhoven, Netherlands. The analysts there produce an aggregate index each month. I also looked at Welton’s LangPop.com, which shows the results of individual searches, such as on Craigslist, Internet Relay Chat, and Powell’s Books.