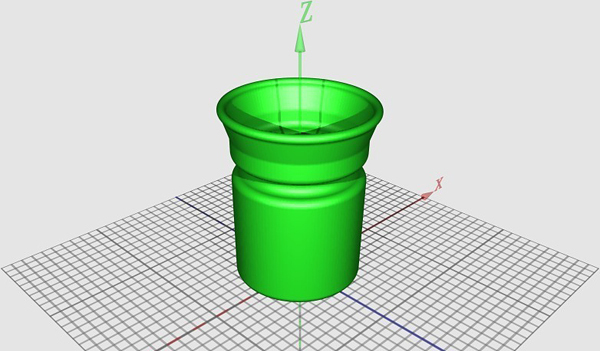 note: images are not at the same scale

The connection is often made between 3D printing and the replicator technology of Star Trek: The Next Generation. The replicator is an ubiquitous part of daily life in the TNG universe, and often serves as a useful plot device for the show as well. For the show’s entire run, by far, the most replicated thing on screen was Captain Picard’s cup of Earl Grey tea.

We’ve a ways to go before we can instantly assemble molecules into a hot beverage (and the cup to contain it) using directed energy fields –but– we can make a rough facsimile. So I made one. This is a model of the cup that materializes when Jean-Luc Picard orders his tea. I based the model on the images found here. The original item is made of glass, which is out of reach for most 3D printers at the moment, though I suspect that will change in the future. I believe the original handle is ABS. The handle snaps into that radiused channel in the middle of the cup.

So there you go — now you too can “replicate” your own cup of “Tea–Earl Grey–Hot!”

NOTE: This is not intended as an actual drinking vessel — it’s just a prop. Don’t drink stuff out of it, for crying out loud.