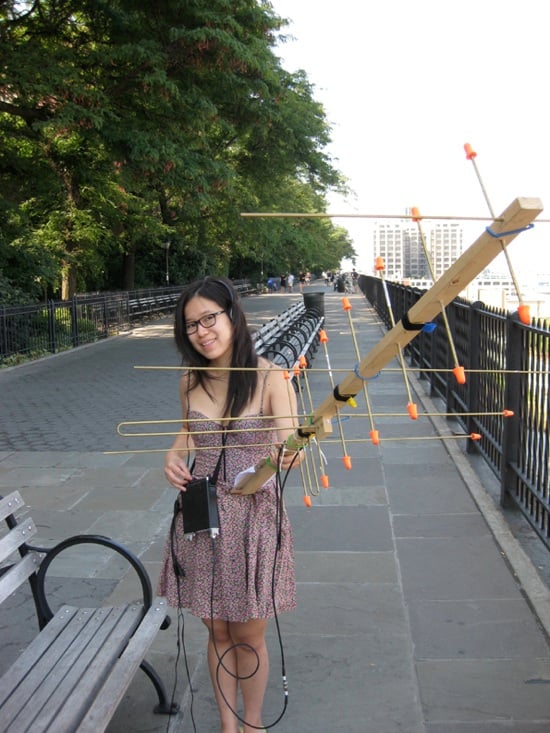 Each hour we are featuring a woman we admire who is currently doing amazing work right in the tech/maker/art/science space. Woman of the hour, Diana Eng.

Diana Eng is a fashion designer who specializes in technology, math, and science. Her designs range from inflatable clothing to fashions inspired by the mechanical engineering of biomimetics. At 22, her inflatable dress (cocreated with Emily Albinski) made the cover of ID Magazine. In 2005, she was a designer on season 2 of the Emmy nominated hit TV show, Project Runway. She won Yahoo Hack Day in 2006 along with her two-team mates for designing and creating a blogging purse in less than 24 hours. She has worked as an assistant designer in research & development at Victoria’s Secret. She is the author of Fashion Geek: Clothes, Accessories, Tech. Her work has been featured in exhibits both in the U.S. and internationally around the globe, and has graced the pages of such publications as Women’s Wear Daily, Wired, and Craft Magazine. Diana currently designs in the NYC fashion industry and is a founding member of Brooklyn based hacker group NYC Resistor.

You may recall our post about Diana’s fashion show a and her profile on Lifehacker. 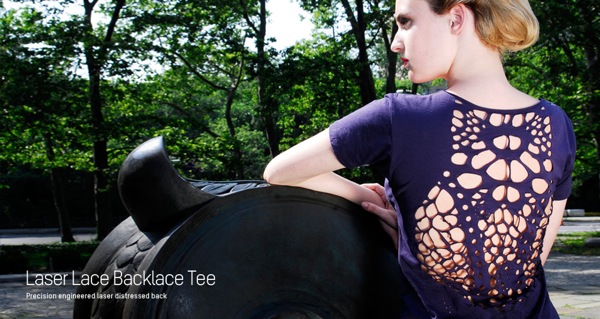 The Laser Lace Tees and Tops were developed from months of careful research and development and wear testing. A special treatment was development to stabilize the lace pattern. I worked very hard to make the tees machine washable because I thought it would be ridiculous to dry clean a t-shirt. As with traditional distressed t-shirts the design will gradually distress over time. But through experimentation, I was able to strategically engineer durable and weak parts into the designs so that the pattern will evolve as it distresses.

Even though the laser was a perfect solution to creating precision lace patterns, when the wear test shirts were worn, the patterns were stretched out and sometimes looked completely different from the original laser cuts. So I looked at floral anatomy and botanical cells for design inspiration. The cells create a structure that is similar to the stretching patterns of the shirt. However, since the anatomy elements are from flowers, they still have a femininity to their designs. My inspiration images were gathered from the Harvard glass flower museum, microscope images of root cells, and Art Nouveau prints.