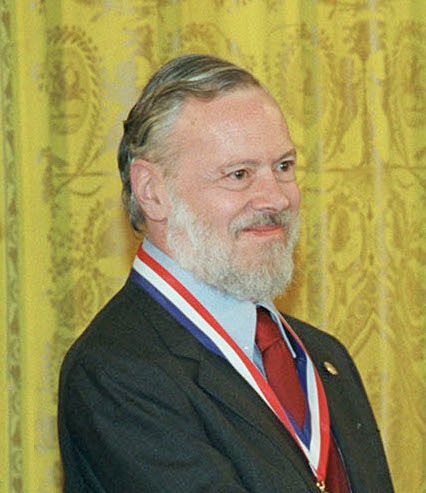 Dennis MacAlistair Ritchie (username: dmr, September 9, 1941 — October 9, 2011) was an American computer scientist notable for developing C and for having influence on other programming languages, as well as operating systems such as Multics and Unix. He received the Turing Award in 1983 and the National Medal of Technology 1998 on April 21, 1999. Ritchie was the head of Lucent Technologies System Software Research Department when he retired in 2007.

Ritchie is best known as the creator of the C programming language and a key developer of the Unix operating system, and as co-author of the definitive book on C, The C Programming Language, commonly referred to as K&R (in reference to the authors Kernighan and Ritchie).

Ritchie’s invention of C and his role in the development of Unix alongside Ken Thompson have placed him as an important pioneer of modern computing.

The C language is still widely used today in application and operating system development, and its influence is seen in most modern programming languages. Unix has also been influential, establishing concepts and principles that are now well-established precepts of computing.

“UNIX is basically a simple operating system, but you have to be a genius to understand the simplicity.” – Dennis Ritchie