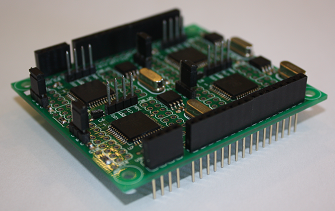 TetraProp is a Propeller Platform board with four onboard Propellers.  Steve writes…

TetraProp is a PropellerPlatform compatible board with four Propellers. It is designed for distributed parallel procecessing experiments. Each Propeller Island is an individulal unit with headers for user connections.

Filed under: propeller — by nick