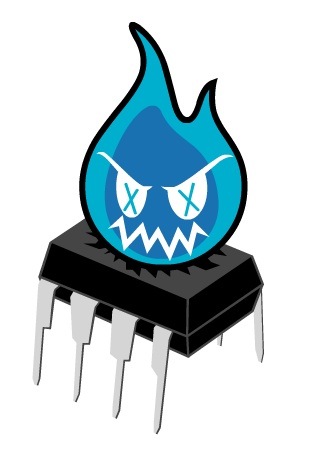 You’ll see this little friend here soon as we release some (more) fun ways to share skill achievements and celebrate some of the mistakes we all make with electronics 🙂 Say hi to the magic blue smoke monster.

Magic smoke (also called factory smoke or blue smoke) is smoke produced by malfunctioning electronic circuits. The origins of the magic smoke have become a running in-joke that started among electrical engineers and technicians before it was more recently adopted by computer programmers. The actual origin of blue smoke is the black plastic epoxy material that is used to package most common semiconductor devices such as transistors and integrated circuits, which produces a bluish coloured smoke during combustion. Smoke from other components that do not use this epoxy may vary in colour, but still be identified as the same phenomenon for purposes of the joke.

Feel free to post name suggestions in the comments 🙂

Filed under: art, iron on patches, wearables — by adafruit