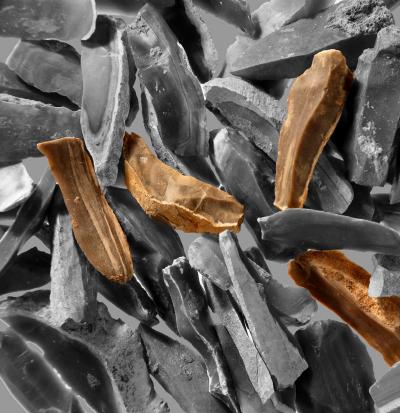 Archaeologists recently discovered a cache of stone-age blades in Qesem, near Tel-Aviv, Israel, with evidence that they were produced using a sophisticated process, akin to a production line:

Archaeology has long associated advanced blade production with the Upper Palaeolithic period, about 30,000-40,000 years ago, linked with the emergence of Homo Sapiens and cultural features such as cave art. Now researchers at Tel Aviv University have uncovered evidence which shows that “modern” blade production was also an element of Amudian industry during the late Lower Paleolithic period, 200,000-400,000 years ago as part of the Acheulo-Yabrudian cultural complex, a geographically limited group of hominins who lived in modern-day Israel, Lebanon, Syria and Jordan.

The blades, which were described recently in the Journal of Human Evolution, are the product of a well planned “production line,” says Dr. Barkai. Every element of the blades, from the choice of raw material to the production method itself, points to a sophisticated tool production system to rival the blade technology used hundreds of thousands of years later.

Though blades have been found in earlier archaeological sites in Africa, Dr. Barkai and Prof. Gopher say that the blades found in Qesem Cave distinguish themselves through the sophistication of the technology used for manufacturing and mass production.

Evidence suggests that the process began with the careful selection of raw materials. The hominins collected raw material from the surface or quarried it from underground, seeking specific pieces of flint that would best fit their blade making technology, explains Dr. Barkai. With the right blocks of material, they were able to use a systematic and efficient method to produce the desired blades, which involved powerful and controlled blows that took into account the mechanics of stone fracture. Most of the blades of were made to have one sharp cutting edge and one naturally dull edge so it could be easily gripped in a human hand.