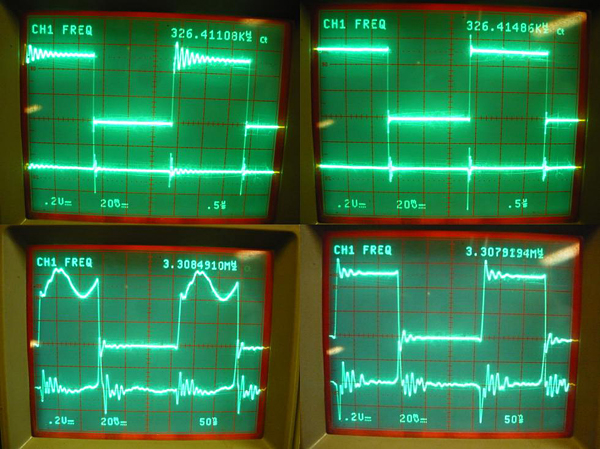 If you’ve ever wondered how decoupling and bypass capacitors work, or why you should use them on every digital circuit, you need to check out Bertho’s excellent tutorial on the subject. He writes:

While enjoying the 7400 contest, it occurred to me that many of the submitted logic designs lacked some of the most elementary safeties to ensure a working result. One of the most disregarded aspects of the designs was the lack of bypass capacitors. Then, with an article about Murphy’s law linking a Maxim application note, it was decided to write a bit about decoupling and bypass capacitors.

As a person, who can be considered “old” in this line of work, I have experienced the problems of missing decoupling first hand. My first high-speed build was in the mid-eighties as an apprentice at a large electronics firm. The design I was building, a digital frequency measurement, used 74Fxx logic at a speed of 11MHz (which was very fast for the time). It was wire-wrapped on a double euro-card size board and used about 40 logic chips. When the time came to turn it on, I noticed that it didn’t work as expected and all kinds of stuff happened all over the place. After checking the build several times I talked to my supervisor about the problem and he just looked at it and said: “There are no bypass capacitors; mount them on all chips over the power supply and we’ll talk then.”. Completely bewildered I did what he said and, as a miracle, everything just worked. Why would seemingly inert capacitance on the power supply make things work?
My supervisor then told me all about switch/surge currents and inductance of the wiring and went on to tell the tale of decoupling. I admit that it took several years before I really understood what he was talking about, but the lesson was learned: always put capacitors on the power supply of logic chips.

This is probably one of the best discussions of the topic that I’ve ever seen: thorough, well-written, and easy to understand, even for a beginner. The reactive spaghetti monster is a wily beast, and it creeps up everywhere. Many thanks to Bertho for writing this great article about how to defeat him.