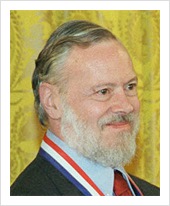 I don’t have the convening power of a Governor Brown, but for those of us around the world who care, I hereby declare this Sunday, October 30 to be Dennis Ritchie Day! Let’s remember the contributions of this computing pioneer.

The C programming language is quite old now, but still active and still very much in use. The Unix and Linux (and Mac OS X and I think even Windows) kernels are all C programs. The web browsers and major web servers are all in C or C++, and almost all of the rest of the Internet ecosystem is in C or a C-derived language (C++, Java), or a language whose implementation is in C or a C-derived language (Python, Ruby, etc.). C is also a common implementation language for network firmware. And on and on.
And that’s just C.

Dennis was also half of the team that created Unix (the other half being Ken Thompson), which in some form or other (I include Linux) runs all the machines at Google’s data centers and probably at most other server farms. Most web servers run above Unix kernels; most non-Microsoft web browsers run above Unix kernels in some form, even in many phones.
And speaking of phones, the software that runs the phone network is largely written in C.

Comments Off on Dennis Ritchie Day