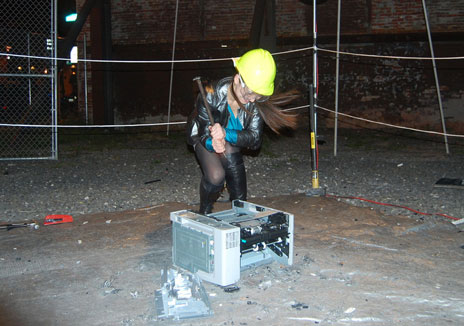 IEEE Spectrum has a great article this month on hackerspaces, from author David Kushner. He writes:

It’s a Tuesday night in Philadelphia—hacker time. A small group of do-it-yourself engineers and hipster geeks gather in a cluttered space downtown. One holds a Kinect, the motion-sensing controller for Microsoft’s Xbox 360 system. But he’s not playing a video game. He’s about to take the Kinect apart to see if he can get it to work with a shoot-’em-up space game for which it wasn’t intended.

It’s a typical challenge at the Hacktory, a freewheeling engineering clubhouse and just one of the many self-described “hackerspaces” popping up in cities around the world. The group takes its name from Andy Warhol’s famous 1960s hangout, the Factory, hoping to bring that sort of imaginative spirit to the technically inclined—and reclaim the word hacker. “It’s a way to take something apart and put it back together in a new way,” says Hacktory director Georgia Guthrie. “It’s a creative act, not a destructive act.”

While many people think of hacker communities as existing online, there’s also a desire to collaborate in person. “Physical hackerspaces sprang out of a need to have a sense of community and a place to hang out,” says Jonathan Lassoff, president of Noisebridge, in San Francisco, which operates out of a former sewing shop and at almost 500 square meters, is one of the larger hackerspaces around.

Hackerspaces.org, a hub for the collectives, lists dozens of groups, from Toylab in Argentina to Blind Security in Uganda. In addition to being a clearinghouse for information on the scene, the site holds a monthly call-in, which allows groups around the world to share ideas (and are kept as audio files for future reference). Hackerspaces.org also organizes hackathon events every month. A recent example, The Playing Card Box Challenge, required participants to “create a hackerspace gift that will fit inside the box from a set of playing cards and mail it to another hackerspace.”

Why is this important? Because it’s IEEE Spectrum, y’all. Every member of the IEEE gets this magazine, which means that it reaches a whole lot of very smart people. The same folks who read the Transactions on Antennas and Propagation and the Journal of Oceanic Engineering get this magazine. Now, you might think that all EE’s are automatically hackers and would already know all about hackerspaces, but you’d be wrong.

Like society at large, some electrical engineers regard what they do as a job, while others regard it as a passion (which is also a job), and there are plenty of instances in between. For every EE who loves everything about electronics and hacking, there’s another who went into the field because they were “good at math” and wanted a steady paycheck, and never thought of it as a subject around which to socialize.

The bottom line is that — again like society at large — some of them are isolated from and completely unaware of this scene. This is a shame, because these are definitely the kind of folks who can enrich a hackerspace. For me, the ultimate hackerspace is one which has a retired telecom network engineer working side-by-side with a 19-year-old PERL developer, and everything else in between. Spectrum is one of the places where you can reach that telecom engineer, along with a whole host of other amazing folks.

Here’s hoping they like what they read here and are drawn by piqued interest to their local ‘space.

So, good on ya, IEEE Spectrum and David Kushner; I look forward to seeing more articles like this in the future!

Comments Off on Hackerspaces in IEEE Spectrum