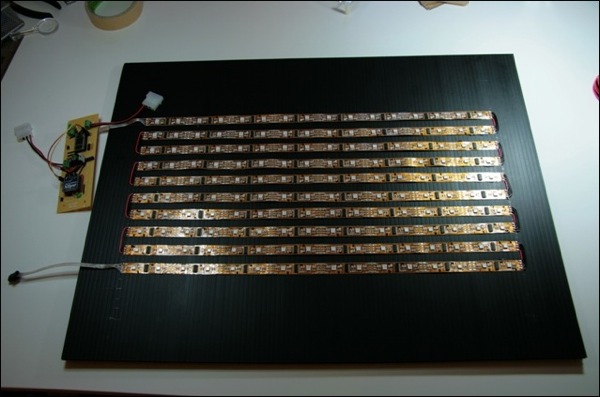 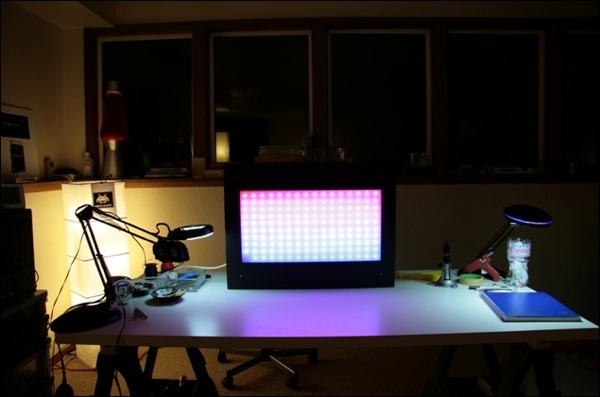 16×10 RGB LED display built with an Adafruit LPD8806 LED strip and a Netduino mini as the controller. The display is capable of showing over 2 million colors. What’s not to like about RGB LEDs? With their bright, mesmerizing glow, often capable of displaying millions of colors, they’re a great to way to catch the attention of the viewer. Now, what if you had a 5 meter long RGB LED strip, loaded with 160 RGB LEDs to play with? Oh, the possibilities… It so happens that Adafruit, in their infinite wisdom, carries a very nice RGB LED strip, powered by a LPD8806 driver and encased in a waterproof sleeve. What about turning it into a mini video wall for instance? Think ‘Times Square’, just smaller 🙂 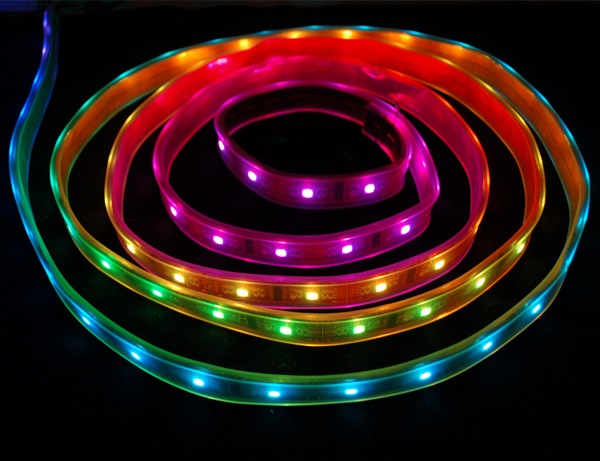 BACK IN STOCK – Digital Addressable RGB LED with PWM waterproof flexi strip. These LED strips are fun and glowy. There are 32 RGB LEDs per meter, and you can control each LED individually! Yes, that’s right, this is the digitally-addressable type of LED strip. You can set the color of each LED’s red, green and blue component with 7-bit PWM precision (so 21-bit color per pixel). The LEDs are controlled by shift-registers that are chained up down the strip so you can shorten or lengthen the strip. Only 2 digital output pins are required to send data down. The PWM is built into each chip so once you set the color you can stop talking to the strip and it will continue to PWM all the LEDs for you

Built in 1.2 MHz high speed 7-bit PWM for each channel – that means it can do 21-bit color per LED (way more than the eye can easily discern). Once you set the brightness level for the LEDs, your microcontroller can go off and do other things, no need to continuously update it, or clock it. The best part is that compared to the WS2801 which can only run one LED at a time, this chip can drive 2 RGB LEDs which means the price stays the same as the older HL1606 strip, nice!

The strip is made of flexible PCB material, and comes with a waterproof sheathing.

You can cut this stuff pretty easily with wire cutters, there are cut-lines every 2.5″/6.2cm (2 LEDs each). Solder to the 0.1″ copper pads and you’re good to go. Of course, you can also connect strips together to make them longer, just watch how much current you need! We have a 5V/2A supply that should be able to drive 1 or more meters (depending on use)

They come in 5 meter reels with a 4-pin JST SM connector on each end, and are sold by the meter! If you buy 5m at a time, you’ll get full reels. If you buy less than 5m, you’ll get a single strip, but it will be a cut piece from a reel which may or may not have a connector on it.

Filed under: leds-lcds — by adafruit