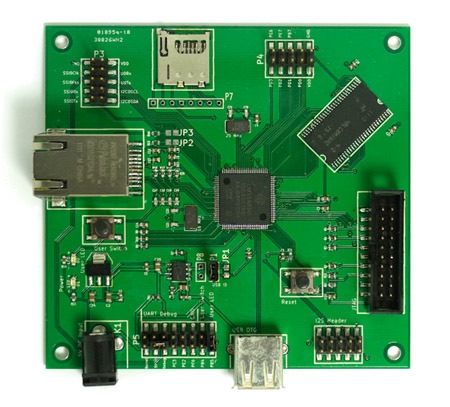 Brian was on our show and tell so we asked him to send along a follow upteho Labs. He writes –

While Arduino gets the lions share of attention in the hobby community there are some limitations to 8-bit microcontrollers which have been recognized by the Arduino project with their recent announcement of plans to make ARM based development boards, as well at the Maple project (STM32 based). ARM microprocessors often offer significantly more RAM/Flash and peripherals at similar prices to traditional 8-bit microcontrollers, however they have a reputation for being harder to use.

In the maker community LPC and STM32 ARM based boards seem the norm, however in my experience LM3S (LM = Luminary Micro which is now owned by Ti) chips are far easier to work with. This is largely due to StellarisWare, which makes peripheral configuration uniform across devices. (See my comparison of UART configuration on many platforms here).

When I realized there were no inexpensive LM3S based boards available (now there are few on eBay as well) I decided to make some. I made a simple breakout style board called Cygni that was as inexpensive as possible so that people could try out ARM and find out that it wasn’t scary after all. And I made two more advanced boards one that could be a USB host (called Eridani) and one that was suitable for tasks requiring a lot of memory, internet access, USB hosting or all of the above (called Procyon).