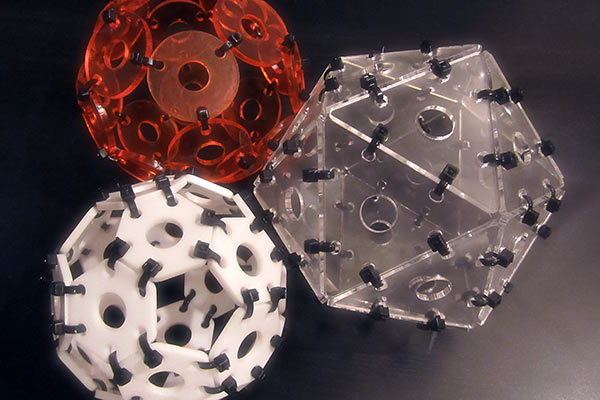 In making our LED disco ball for the new year, it will be necessary to transition from the flat planes of Adalight and Adavision into the three-dimensional world. This has been a humbling experience in the KISS principle: “keep it simple, stupid!” The first tries did not end well…

Our initial attempts involved taking existing 3D forms (globes, salad bowls and lamp post diffusers, among other things) and drilling holes over the entire surface for mounting LED pixels. This is not an entirely rotten idea, but it falls short of one of our goals: we might like to offer kit packs in the future…or at the very least, readers should be able to follow along at home! Asking would-be customers to drill a precise geodesic pattern of holes into anything wouldn’t be a great PR move. (By way of comparison: you might be familiar with the Hoberman Sphere toy…but few recall the earliest version to land in stores: a bag of eleventy bajillion nearly identical plastic parts, to be assembled by the customer…or, just as likely, to be half assembled and either returned or flung in the trash in frustration. Later editions came pre-assembled, and the rest is history.) 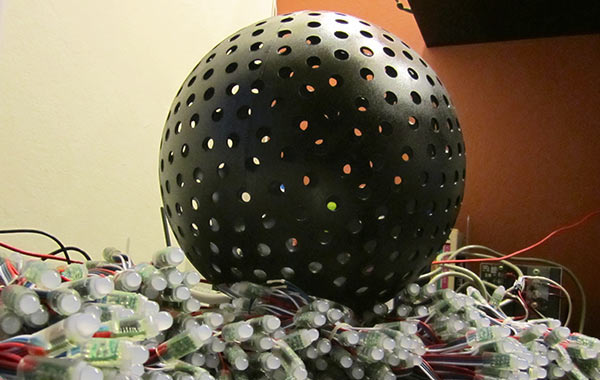 Two additional factors pushed us toward an alternate approach:

Our next approach then was polyhedral in nature, inspired by the geodesic domes popularized by Bucky Fuller. The shape would take care of itself…but, applying the Hoberman lesson, what we needed to figure out was a relatively painless way of fastening all the parts together. Something durable, but neither time-consuming nor requiring great precision. Quite a few existing approaches were looked at… 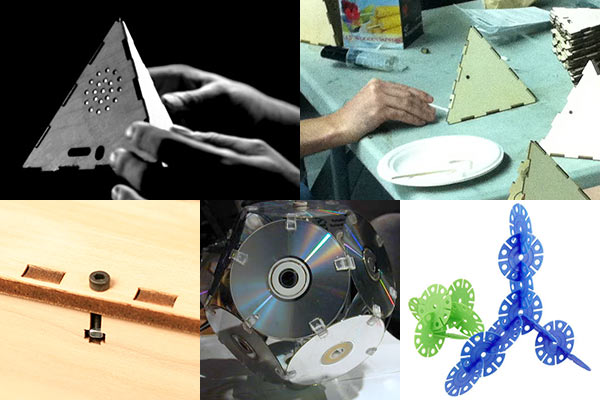 Some require adhesives (and time, and patience), others call for hardware (and dainty fingers), while still others need nothing more than their own friction, but have no “give” to make assembly easier. In the end, we went our own way, arriving at a solution that met all our criteria for strength and simplicity: 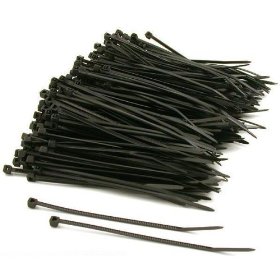 Cable ties! Dozens upon dozens — a veritable plethora — of cable ties! Cheap and plentiful from the local hardware store. If you can live with the “orange pomander ball” aesthetics of the finished shape, this works remarkably well…our polyhedra started out entirely flexible as they’re first put together, then gradually firm up as all the ties are cinched down, finally resulting in a sturdy, solid shape (the ties are then trimmed flush). Not super-precise where the edges meet, but ample for our needs. And they’re just fun to build! (Math teachers and tabletop gamers take note.) So we’re going to run with this as the plan…stay tuned… 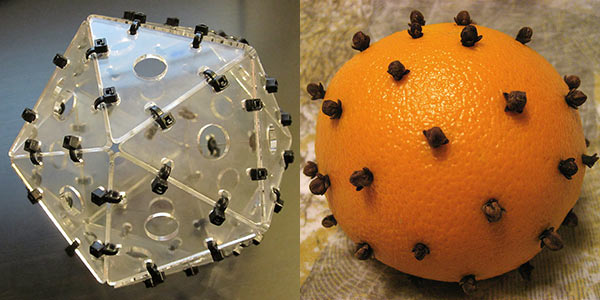