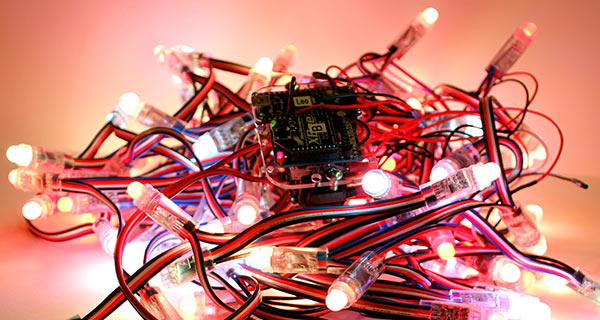 The Time Ball will have 120 RGB LED pixels on its surface…that’s nearly as many as the Adavison video wall, and faced similar problems of feeding power to than many hungry LEDs (nearly 7 Amps worth!). Adavision used an ATX computer power supply…an excellent frugality hack because these power supplies are plentiful and cheap (sometimes reclaimed from old equipment). But as a “fashion item,” the Time Ball would benefit from clean cabling…not to mention that the loud fans in some ATX power supplies can be like working next to a jet engine.

Since ample power is going to be a recurring need as customers’ LED projects grow in scope and sophistication, we’ve been evaluating different options, such as this laptop-style power brick: 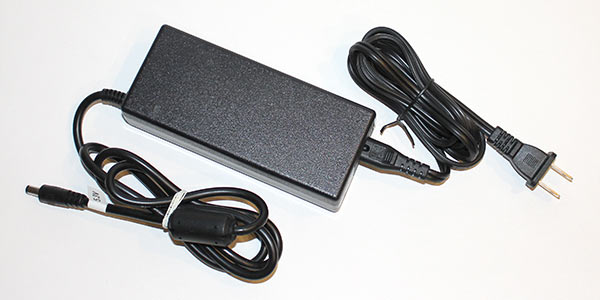 The brick is compact, fanless, provides 5 Volts at up to 10 Amps, uses the same 5.5/2.1mm power connector as the smaller 2 Amp supply and is compatible with the screw terminal adapter. Looks like a winner all around, so expect to see this in the store some time in the weeks ahead! (Until then, Ask an Engineer viewers know the drill: “It’s not out yet, so don’t ask.”)

A lot of devices use this same plug, including our 9V and 12V power supplies. In order to avoid expensive blue smoke and heartbreak, I’ve gotten into the habit of immediately labeling all power supplies near the tip so they don’t get mixed up with the wrong equipment. Over-voltage will kill your LEDs!

For distributing power, Adavision required soldering pairs of power wires to ATX power cables. Wanting something that could be more easily dismantled and reconfigured in future projects, I’ve been examining alternatives such as these barrier strips and jumpers: 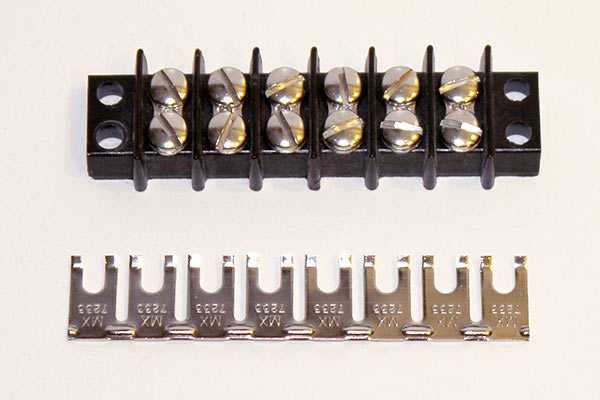 The barrier strips are fairly common and can be found at Radio Shack, the electrical department in better-stocked hardware stores, or various online sources. Meanwhile, the 8-position jumper (which converts the barrier strip into a single “bus bar”) is seemingly milled from a single block of unobtanium or something. The only place I’ve located this elusive item so far is…drumroll for irony…Radio Shack!

Two six-position barrier strips are used, one each for +5V and ground. Terminal spades have been crimped onto the power leads for five LED strands, as well as leads for the microcontroller and heavy-gauge wire to the screw terminal adapter for the power supply. The jumper strips are cut down to size with beefy wire cutters. Plastic covers will later be added to avoid electrical shorts: 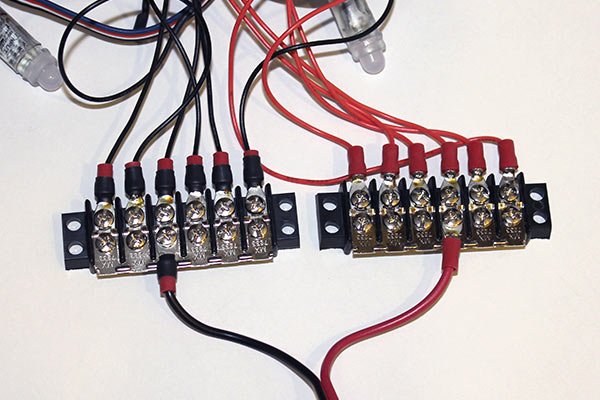 The project provided an opportunity to test something out that I’ve been eager to try. If you’ve worked with longer LED strands powered from one end, you may have observed a phenomenon where the furthest LEDs become progressively discolored, due to the voltage drop along the length of the wire. This is why I’ve been adamant about limiting strands to about 25 LEDs (or 1 meter with the LPD8806 strips) before adding additional power taps. The voltage drop on shorter strands is less noticeable. 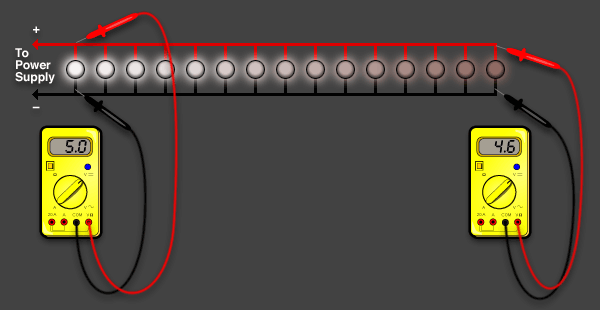 A common work-around is to power longer strands from both ends. Generally speaking, this probably works well enough in most situations, but it does leave the door open to possible gremlins later when you least expect it. Ground loops — multiple paths to ground — could make the data signals more susceptible to interference. Everything works fine on your desk, then you set it up elsewhere — perhaps there’s an unseen microwave oven on the other side of the wall — and are up ’til 3am looking for the bug you think is in the software.

To avoid this with Adavision, strands were powered from the middle — 25 pixels to the left, 25 to the right. Limiting the strand length makes the voltage drop less obvious:

If you’ve been to the west coast Maker Faire then you may have met my friend Lindsay and his Electric Giraffe, 17 feet tall and covered head-to-toe in LEDs. Needless to say, he’s had a bit of experience with LEDs and long distances: 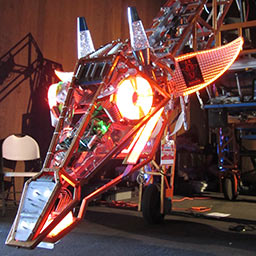 A simple trick he showed me is to power the strands from opposite ends: +5V at one end, ground at the other. Because the power to every LED then passes through an equal length of wire, the voltage drop is consistent. There’s still some voltage drop — you can’t change the laws of physics — but it’s uniform along the entire strand and all the LEDs are equally bright. And no ground loop:

Five such strands are used in the Time Ball. The clock and data wires are joined from each strand to the next to form a continuous 125 LED strand with five +5V and five ground wires leading to the power blocks. Only 120 of these LEDs are needed for the ball…the rest could be cut off and used in a small project, but in case a complete strand was needed later I opted to leave them attached, stuffed inside the ball and not addressed by the software.