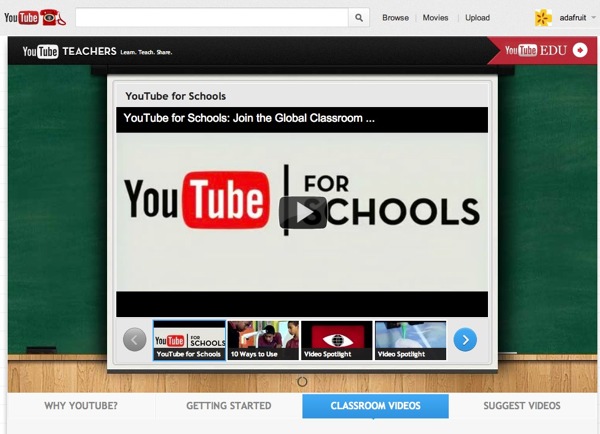 This is a great start! YouTube is announcing a new line-up of educational channels to give students (and teachers, and parents) around the world more video resources.

SciShow
SciShow is all about teaching scientific concepts in an accessible and easy-to-understand manner. It will have four weekly episodes through 2012, delivered in short, three-minute segments, as well as longer ten-minute episodes, with up-to-the minute news and interviews on subjects ranging from particle physics to DNA. The first episode is about “non-newtonian fluids,” and the second episode focuses on the Higgs Boson particle and includes interviews with the director general of the European Organization for Nuclear Research. About the teacher: Hank Green is a well known Web entrepreneurs and personality.

Numberphile
Numberphile is, quite simply, a channel for people who love numbers and want to find out the stories behind them. Numberphile put out their first teaser video on an auspicious date (the last binary date of a generation) – 11.11.11 – and of course, their video was all about the number 11 – and barcodes! They’ve gone on to make videos about 98, 15, 31 … teaching about grafting numbers and hexadecimals and Mersenne Primes in the process. About the teacher: Brady Haran is a former BBC journalist and current independent filmmaker who is simply crazy about math and science. His first foray into the world of YouTube education was to make a video about every element in the periodic table, an endeavor that garnered him 19 million YouTube views and 63,000 subscribers from around the world. His most-viewed video (about what happens to a cheeseburger in hydrochloric acid) received more than half a million views.

DeepSkyVideos
Back in the 1700s, astronomer Charles Messier was hunting for comets … and kept getting frustrated by objects that were NOT comments – so he made a list of them, which became one of the most famous lists of cosmic objects in science. And Brady Haran is on a quest (much like his Periodic Videos quest) to make videos about all 110 Messier Objects. You can watch his introduction to the project here, and the very first video (about object 1 – crab nebula) here.

Steve Spangler’s The Spangler Effect (launching early February)
YouTube was only five months old when Spangler first taught viewers how to turn a bottle of Diet Coke and a roll of Mentos into an exploding geyser. According to Steve, ‘The Spangler Effect’ is a name that someone once used to describe the effect that he has on people who experience his unique way of making science fun.

YouTube Education has 700+ partners and more than 500,000 videos. Youtube.com/teachers is a set of education resources that includes more than 300 playlists of videos that align with core education standards, and in December, YouTube announced YouTube for Schools, a network setting that allows schools that previously restricted access to YouTube to open up just the educational videos on the site.

Filed under: educators, science — by adafruit