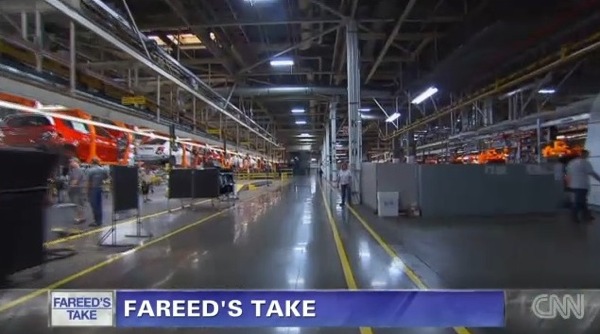 [The president]… forcefully in his State of the Union about the importance of reviving manufacturing in America. If you talk with economists they will tell you it’s a very complex problem, involving tax, trade regulatory policy, exchange rates, and educational skills. It is all those things.

But when you move from high-level policy to specific cases, you will often find one element that is rarely talked about: a foreign government’s role in boosting its domestic manufacturers with specific loans, subsidies, streamlined regulations and benefits. In effect, these governments – many in Asia, though some in Europe as well – have a national industrial policy to help manufacturers.

In a front page story last week, the New York Times detailed how Apple’s iPhone ended up being made outside America. The Times wrote about the Apple executives who visited a factory in China to see if it could cut the glass precisely for the phone’s touch screen. When the Apple team got there, the factory owners were already constructing a new wing. “This is in case you give us the contract,” the manager explained.

How could they afford such an extravagant gesture? Well, it turns out, the Times noted, that they received subsidies from the Chinese government. That one incident is part of a pattern.

In 2009, for example, Bridgelux, a light-emitting chip manufacturer in the United States, was searching for a new factory site, the company considered the cost of building in the U.S. and elsewhere. The government of Singapore offered to pay half the setup cost of the plant.

If there were similar programs in the USA for companies like Adafruit, Makerbot, etc – we could easily employ thousands of Americans, almost overnight. We’ll get there for sure – we must, it certainly seems we’ll get there without any subsidies – time (and the markets) will decide which way works best.