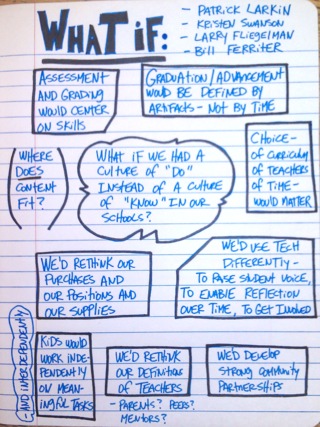 What IF schools created a culture of “DO” instead of a culture of “KNOW?” Doesn’t that action-oriented stance reflect the kind of real-world learning environment that we know resonates with kids?

More importantly, don’t we WANT kids who see themselves as living, breathing contributors to the world around them rather than simply as little people locked away behind our walls waiting to be released?

Of course, we’d have to work to take active steps to redefine almost everything about our schools if a culture of “Do” is really going to be possible.  Grading will need to change — from a focus on content mastery to a focus on demonstration of an ability to apply content in novel situations.