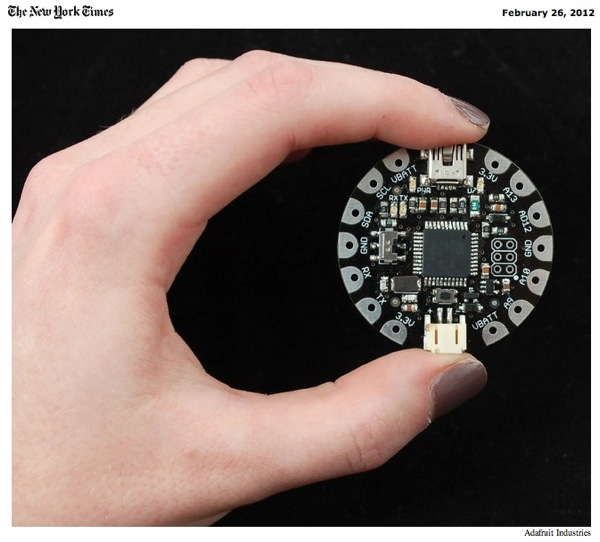 If you want to try your own hand at creating a computerized, electronic glow, Adafruit Industries, a New York company that makes and sells kits and components, will soon introduce a small, wearable microprocessor called Flora to control LEDs or other electronic adornments. Becky Stern, who leads the company’s wearable electronics group, will develop projects and kits based on it for crafters. “Pop stars have costumes made by ateliers at huge cost,” Ms. Stern says, adding that her company’s products would “let you make these electronic wearables at home for a fraction of that.”

The Flora platform from Adafruit should spur the wearable-computer movement, Professor Hartman says. “It has built into it all of the hardware needed to program,” she says, as well as the ability to link to GPS and Bluetooth, among other components.

One Flora kit, meant for a handbag, will offer a GPS sensor linked to a LED display. “You won’t have to take your cellphone out to check for directions,” says Limor Fried, an electrical engineer and founder of Adafruit. “The bag will have a big arrow to tell you which direction to go.” The kit’s price will be less than $100, not including the cost of the handbag, she says.

A future kit based on Flora will create video displays on the back of a jacket, says Phillip Torrone, a senior editor at Make magazine and creative director at Adafruit. “The display will be low-resolution at first,” he says. “But it will be recognizable as video.”

Adafruit will also develop apps for iPads, iPhones and Android devices, Ms. Fried says. Hobbyists can then make T-shirts for joggers, for instance, that include LEDs that glow red or orange when air quality is poor, with a Bluetooth connection to tweet the information to other joggers.

…
Ms. Fried at Adafruit says she looks forward to a time when people will routinely modify the style of their shoes, jackets, T-shirts or handbags with circuitry. Then, she says, Bill Cunningham, the fashion photographer for The New York Times who has long roamed the streets for the latest looks, will have a new trend to cover: LED fashions.

Read the whole thing – great overview, in print too. A version of this article appears in print on February 26, 2012, on page BU5 of the New York edition with the headline: “Which Way to the Ball? I’ll Ask My Gown”.