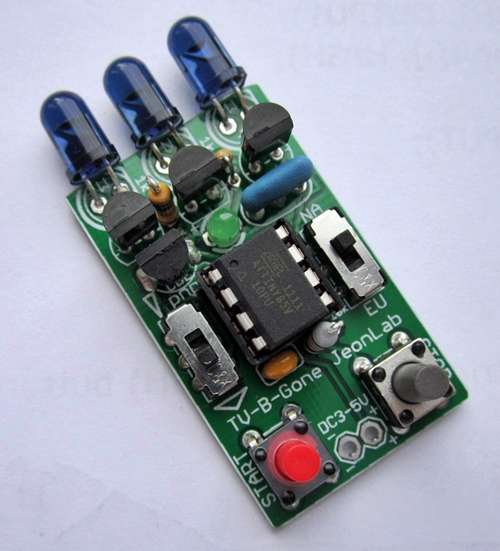 JeonLab on Instructables made some mods to the TV-B-Gone, and released the files and instructions for following suit. Cool project, and good going Jeon!

Need to save battery
I have thought about to turn off the device before the full cycle finished once it either turn on or off a TV. Adafruit’s firmware database is designed as the codes for popular TV models emits first. So in most cases, long before it emits all the codes, my target TV is turned on or off. I thought about to add a power switch but that wasn’t very attractive to me.

Idea and solution!!
A couple days later, I suddenly got a good idea to utilize the Region Detection pin (pin6 of the ATtiny85v). Once the program detects the region from the level of pin 6 (float (internal pull-up): US, pull-down: EU), it is not used any more until all the codes pulsing is finished. So, in US mode for example, after it started pulsing and when you want to stop it, forcing the pin6 to ground will exit the do loop in software and the device will go sleep. I tested both US and EU mode with modified code and worked fine. This way, you can save battery.

Here in this introduction, I included a picture of the assembled TV-B-Gone JeonLab, but the circuit, which will be shown and explained step by step, is quite simple, so you may be able to assemble one on any prototype board or even on a bread board.

Filed under: tvbgone — by Becky Stern