GE and the maker movement… @generalelectric

Ever used a laser cutter? How about a cold saw, ironworker, injection molder or 3D printer? If not, do you want to? No matter your power-tool qualifications (or lack thereof), GE wants to give you a chance to get some hands-on time with them. The company is launching a series of pop-up open workshops at South by Southwest called GE Garages. A promotion for its “GE Works” campaign, the garages are scheduled to appear in Houston, Cincinnati and San Francisco later in the year. Tools in the garage are free, and they’re open to anyone to use for their own projects (with “support in product building”). 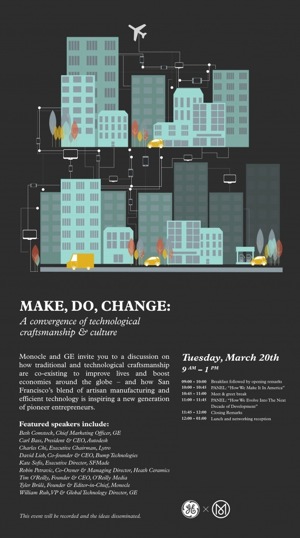 GE previously had a Makerbot in an ad, and they’re having an event called make, do, change about manufacturing with the CEO of Autodesk and Tim O’Reilly. They also had Saul Griffith on “Ask GE” in a segment about makers. In 2010 Ladyada was in a MAKE video that GE sponsored about our Tweet-a-watt project.

In 2011, Fortune ranked GE the 6th largest firm in the U.S., as well as the 14th most profitable. Other rankings for 2011 include #7 company for leaders (Fortune), #5 best global brand (Interbrand), #63 green company (Newsweek), #13 most admired company (Fortune), and #19 most innovative company (Fast Company) – Wikipedia.

We often get asked where the maker movement is going, what companies are getting involved, this post is so we can quickly point to some things going on with GE.