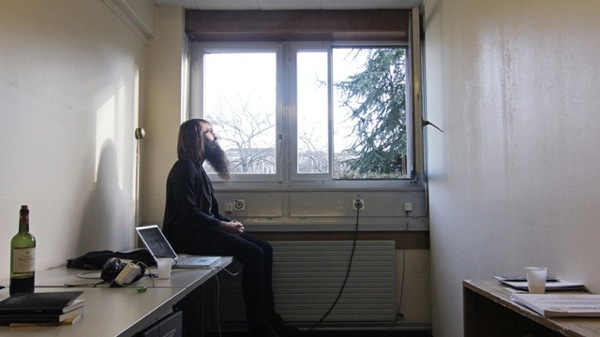 Julius von Bismarck is only 28 years old, but his artistic resumé is already several pages long. He’s currently taking time off from school to be the new artist in residence at CERN – the world’s biggest particle physics research facility, home of the Large Hadron Collider. On Wednesday, von Bismarck will deliver a major public address at CERN’s Globe for Science and Innovation.

Von Bismarck won the top prize at Ars Electronica in 2008 for an ingenious device he called theImage Fulgurator, a hacked camera that injected stealth images into other people’s photos when they weren’t looking. In his striking project Public Face I, he mounted a giant neon smiley above the city of Berlin; the smiley changed its expression based on an estimate of the city’s mood that day.

Von Bismarck’s two-month artist residency at CERN – the first installment in the new “Collide @ CERN” program, created by CERN cultural specialist Ariane Koek – will pave the way for more artists to visit CERN in the future.

“I think the concept of putting an artist somewhere totally different is good,” von Bismarck said. “I don’t believe in the concept of a lot of artists hanging out in the same place, just doing art about art about art. I think it’s good to mix it up.”

Comments Off on CERN’s New Artist in Residence