Emmy Noether, the Most Significant Mathematician You’ve Never Heard Of 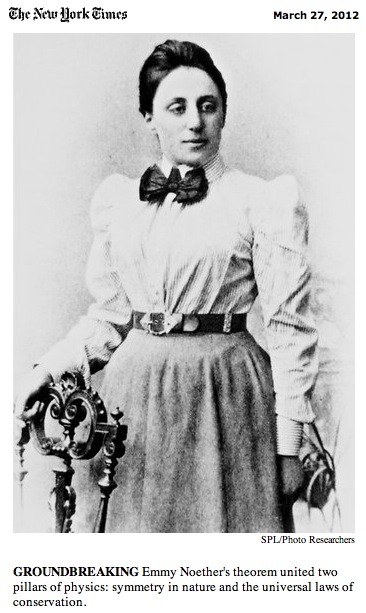 Scientists are a famously anonymous lot, but few can match in the depths of her perverse and unmerited obscurity the 20th-century mathematical genius Amalie Noether. Albert Einstein called her the most “significant” and “creative” female mathematician of all time, and others of her contemporaries were inclined to drop the modification by sex. She invented a theorem that united with magisterial concision two conceptual pillars of physics: symmetry in nature and the universal laws of conservation. Some consider Noether’s theorem, as it is now called, as important as Einstein’s theory of relativity; it undergirds much of today’s vanguard research in physics, including the hunt for the almighty Higgs boson. Yet Noether herself remains utterly unknown, not only to the general public, but to many members of the scientific community as well.

Comments Off on Emmy Noether, the Most Significant Mathematician You’ve Never Heard Of