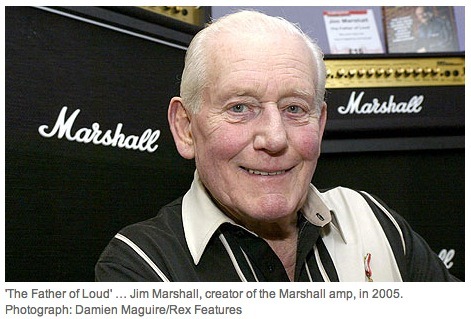 The man who gave rock one of its key visual and sonic props has died. Jim Marshall, known as “The Father of Loud” for inventing the Marshall amplifier, was 88 years old.

Marshall was a drummer and drum teacher who used his earnings to set up a music shop in west London in 1960. Among his customers were the likes of Ritchie Blackmore and Pete Townshend, and it was through talking to them that Marshall realised there was a gap in the market for a guitar amplifier cheaper than the American-made models popular at the time. When, at Townshend’s request, a Marshall 1959 amplifier head was teamed with a cabinet, the “Marshall stack” was born, becoming the defining feature in rock bands’ backlines for generations to come.