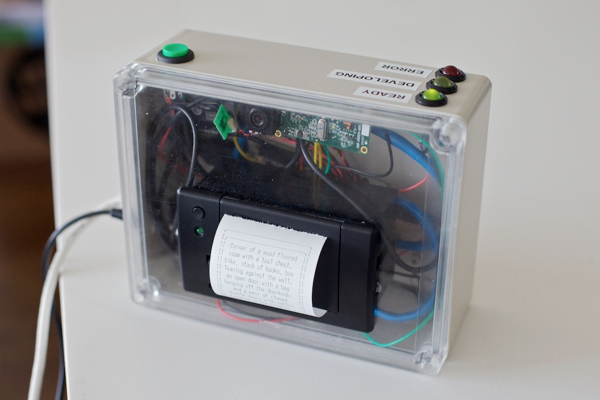 The Descriptive Camera works a lot like a regular camera—point it at subject and press the shutter button to capture the scene. However, instead of producing an image, this prototype outputs a text description of the scene. Modern digital cameras capture gobs of parsable metadata about photos such as the cameras settings, the location of the photo, the date, and time, but they dont output any information about the content of the photo. The Descriptive Camera only outputs the metadata about the content.

The technology at the core of the Descriptive Camera is Amazons Mechanical Turk API. It allows a developer to submit Human Intelligence Tasks (HITs) for workers on the internet to complete. The developer sets the guidelines for each task and designs the interface for the worker to submit their results. The developer also sets the price theyre willing to pay for the successful completion of each task. An approval and reputation system ensures that workers are incented to deliver acceptable results. For faster and cheaper results, the camera can also be put into accomplice mode, where it will send an instant message to any other person. That IM will contain a link to the picture and a form where they can input the description of the image.

The camera itself is powered by the BeagleBone, an embedded Linux platform from Texas Instruments. Attached to the BeagleBone is a USB webcam, a thermal printer from Adafruit, a trio of status LEDs and a shutter button. A series of Python scripts define the interface and bring together all the different parts from capture, processing, error handling, and the printed output. My mrBBIO module is used for GPIO control (the LEDs and the shutter button), and I used open-source command line utilities to communicate with Mechanical Turk. The device connects to the internet via ethernet and gets power from an external 5 volt source, but I would love to make a another version thats battery operated and uses wireless data. Ideally, The Descriptive Camera would look and feel like a typical digital camera. 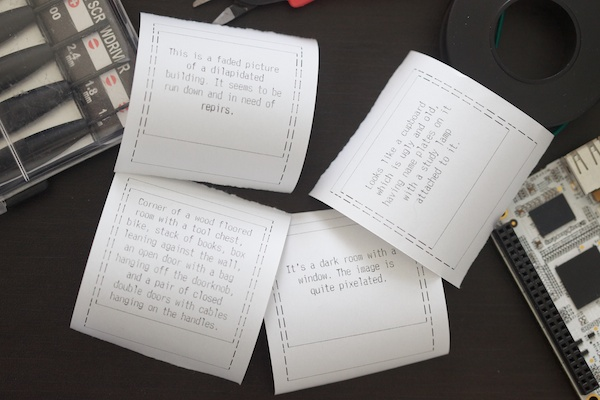 Filed under: beaglebone, internet of things — by Becky Stern

Comments Off on Descriptive Camera prints text about the scene