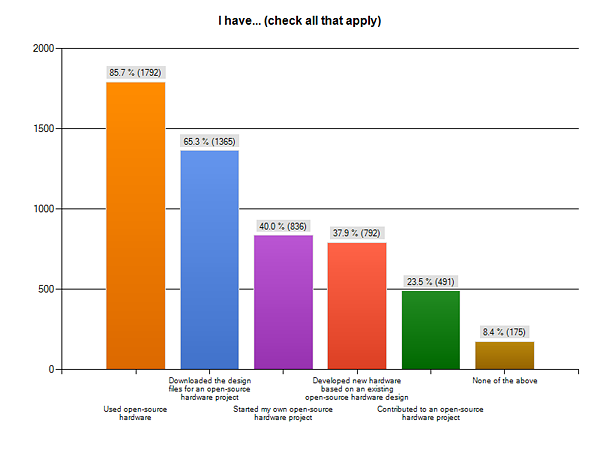 The OSHW survey ended last week, and the survey team is starting to crunch the numbers. Catarina writes:

The open hardware community survey received 2091 responses from 70 countries! A big thank you to all those who took the time to fill out the questionnaire. We’re now sorting the data and will publish the aggregate results in the coming weeks. We hope that the information and insights you shared will help us better serve this community and make the case for open source hardware.

And a special thanks also to those who provided feedback on the questionnaire itself. Your input is greatly appreciated and will help us do better next time. Initially we launched the survey with a question about race/ethnicity, but while this is a common demographics question in the USA, feedback from respondents in other countries informed us that this is not the case in several other regions. So, out of respect for different sensibilities, we pulled that question shortly after the survey launched and purged the data collected until then. You can download the feedback report here.

The graph above is very encouraging. It shows that 40% of respondents have started their own OSHW projects and 37.9% have based their own hardware on other folks’ designs! There will be more data forthcoming in the next few weeks, but I’m glad Catarina chose this as one of the first datasets to share, because I think it says a lot about the people who make up this community! It proves that open-source hardware is capable of bootstrapping itself, and that it is self-sustaining.

Comments Off on #OSHW Survey — The First Numbers #openhardware