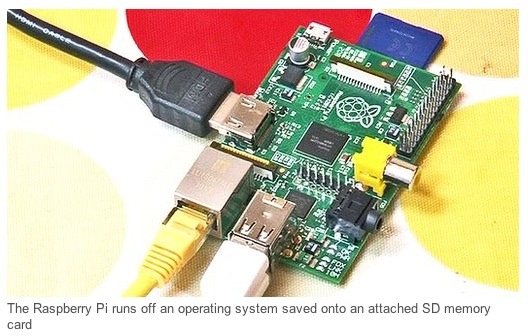 We set off to explore the desktop, which includes a web browser and the XBMC open source media player.

We were impressed that this tiny machine could play out an HD movie, but after checking out the first minute or so of Big Buck Bunny, the cartoon that comes loaded on the SD card, we remembered the real function of the

There are two programming languages available to try on the Pi: Scratch and Python.

Scratch is designed to introduce younger children to programming, and is already used in a number of primary schools. Isabell found a demo racing car game, and showed me how simple it would be for children to change instructions in the program.

Next, we found the Python folder, aimed at slightly older students.
It came with a selection of games – the idea is you play them, then tinker with the code. We tried one, it froze, we then tried a number of keyboard commands to force it to quit, but nothing happened, so we had to reboot.

Then, after a bit of exploration, Isabell opened a Python window and tried out a line of code.

She typed in ‘print “Hello!”‘, pressed return, and, lo and behold, the computer said “hello” back. One small step for coding…