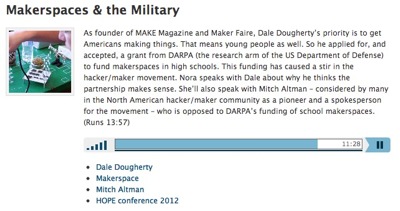 As founder of MAKE Magazine and Maker Faire, Dale Dougherty’s priority is to get Americans making things. That means young people as well. So he applied for, and accepted, a grant from DARPA (the research arm of the US Department of Defense) to fund makerspaces in high schools. This funding has caused a stir in the hacker/maker movement. Nora speaks with Dale about why he thinks the partnership makes sense. She’ll also speak with Mitch Altman – considered by many in the North American hacker/maker community as a pioneer and a spokesperson for the movement – who is opposed to DARPA’s funding of school makerspaces.

Comments Off on Makerspaces & the Military