From the Adafruit Forums: Fun With Thermistors

My approach differs slightly in that I use a lookup table instead of the logarithmic formula given in the Adafruit tutorial. I didnt make any measurements, but it could very well run faster, since it doesn’t depend on a lot of complex floating-point math. In any case, Lookup tables are useful sometimes, and my example not only shows how to do a lookup, but also how to interpolate between the two closest entries to the measured value.

You will also find a helper spreadsheet that was used to create the LUT used in the sketch, along with some interesting charts that show graphically, the relationship between temperature and thermistor resistance, as well as temperature versus ADC voltage.

Check out the rest of his post in the forums, and get the updated library here. 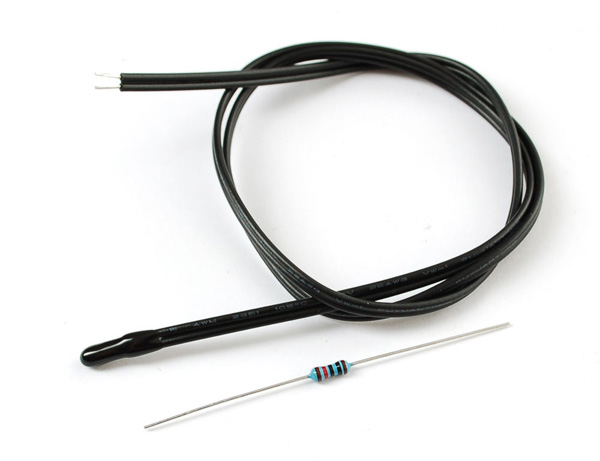 These are often used for air conditioners, water lines, and other places where they can get damp. The PVC coating of the wires is good up to 105 °C so this isn’t good for very hot stuff.

We even toss in an additional 1% 10K resistor which you can use as calibration or for a resistor divider.